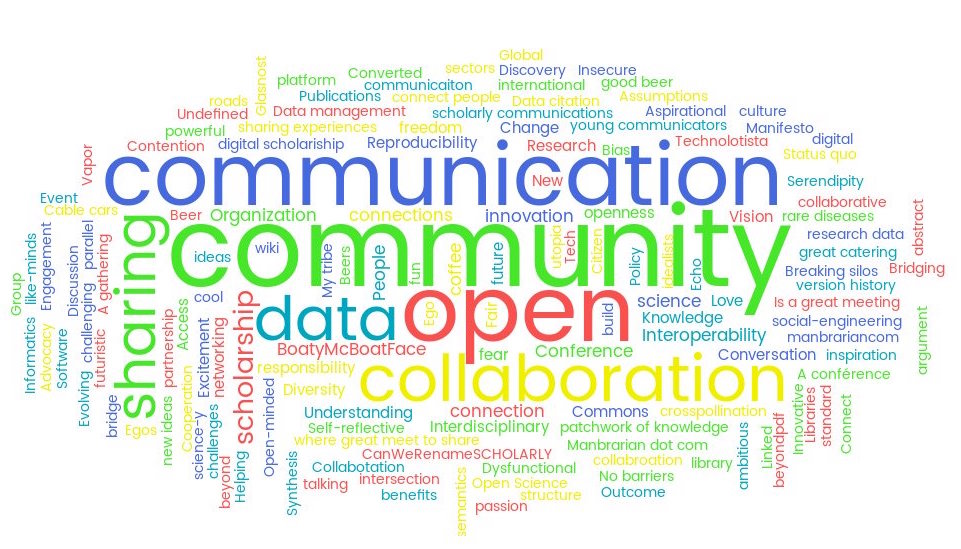 WORKING BEYOND BORDERS: WHY WE NEED GLOBAL DIVERSITY IN SCHOLARLY COMMUNICATIONS

The session Working Beyond Borders was proposed by Cameron Neylon and Leslie Chan with the intent of raising critical conversations about the need to include non-Anglo-centric perspectives on scholarly communication. Moderated by Dominique Babini, Open Access researcher at the University of Buenos Aires and Coordinator of Research and Advocacy at CLACSO, it featured presentations by Laura Foster, faculty at Indiana University Bloomington, currently working in South Africa as part of the Open and Collaborative Science in Development Network (OCSDNet) project on Indigenous Knowledge and Climate Change Adaptation; Dora Canhos from Centro de Referência em Informação Ambiental based in Brazil and principal investigator of the OCSDNet project Virtual Herbarium as Open and Collaborative Science Infrastructure, and Juan Pablo Alperin, originally from Argentina, faculty at Simon Fraser University and specialist in Open Access in Latin America.

Speaking about diversity is not new. As our networks grow bigger and wider, our conversations revolve around the joys of multiculturalism and the small, small world we live in. However, it takes a quick scroll down the #Force2016 feed, to notice FORCE11’s enthusiasm to move beyond the chit-chat and discuss meaningful ways to bring global diversity into scholarly communications.

The session “Working Beyond Borders: Supporting Global Creation of and Engagement with Scholarly Information” provided the venue for this conversation. It raised important questions about the need to include a diversity of voices and approaches in scholarly communication, focusing on stories of success and challenges from outside Europe and North America, and on what these stories tell us about how to improve research communication globally.

The speakers offered pragmatic recommendations, based on Latin American and African experiences with Open Science; reminding the audience that learning from regional initiatives and collaborations is an important part of increasing global diversity in scholarly communication. Here, some of the key takeaways from their talk:

Including new voices from outside North America and Europe enables knowledge sharing across regional scholarly communities. As pointed out in Babini’s introduction, African, Asian and Latin American scholarship has struggled to receive attention and visibility in the international research community for years. At the same time, these regions have developed systems of knowledge production that enable the participation of diverse scholarly and non-scholarly actors through open access models in which the research produced in the region can be accessed by the general public.

The popularity of Open Access in Latin America, for example, offers lessons on how researchers can disseminate their research more widely. According to Babini, 80% of journals in Latin America are Open Access, including high traffic platforms like Scielo and Redalyc.  Local academia has not resisted to the OA model, in large part, to build upon the synergies enabled by their common language, culture, and views on knowledge sharing.

Juan Pablo’s research reveals that having a resilient OA infrastructure and culture in place yields positive results from the public in the longer term. His findings show that first, the public is interested: if you make knowledge accessible, people will come and use it. Second, that scholarly communication is accessed by non-scholars, and thus, the tools to share scholarship, must also cater to non-scholars; and third, how cooperative OA models ensure a wider scale access to research. Access his dissertation here to learn more.

Members of the audience expressed interest in replicating Alperin’s research in North America and Europe – and it sounds like a very logical first step.

Once we identify who is interested in open scholarship, the motivations to access open knowledge and how this knowledge is applied, we can take a more pragmatic approach to growing stronger cultures of sharing between scholars and non-scholars.

Laura Foster’s presentation encouraged us to challenge ‘scientific objectivity’, with questions such as: ‘Who gets to produce scholarly knowledge?, what is considered legitimate scholarly knowledge?, and who is ultimately benefiting from current models of knowledge production and sharing?’. Foster proposes a situated, self-reflective approach to science that reminds us that knowledge is neither neutral nor objective, but is rather embedded in a set of values, interests and histories that shape the questions we ask and the methods we use to answer them.

These questions are essential for contexts like that of South Africa, where scientific knowledge practices in local and international academia continue to perpetuate legacies of colonialism. The notion of ‘openness’, rather than representing the democratization of knowledge as in the West, is locally associated with the dispossession of indigenous knowledge and property by colonial elites. Asking who wants open up knowledge and who wants to keep it closed pushes us to reflect on our position in history and how the science we are producing speaks today to the ways in which knowledge has been produced and used in the past.

This ‘situated science’ analysis – doing research while assuming knowledge production is situated within particular historical, political and social-cultural relations- brings to light the ways in which power dynamics and global inequality continue to shape scientific research. Embracing self-awareness in our research pushes us to fine-tune our questions and methods, in such a way that our scientific practices reflect our values; or in Foster’s words, so “science is democratized in a more meaningful way.”

The session emphasized the role of cooperation and collaboration as essential for open and inclusive research -yet, it recommended a critical and pragmatic approach. After all, engaging with diverse stakeholders (researchers, local communities, funders, policy makers, among others) means there will be an equally diverse set of demands to negotiate. How can we successfully integrate a diverse set of voices, needs, and knowledge of the scientific process?

The challenge of having to negotiate interests among partners is met by the unique opportunity of facilitating meaningful conversations and addressing the challenges of collaboration. In South Africa, OCSDNet researchers were met with resistance by indigenous communities at the beginning of their research project. As a response, they collaboratively developed ‘community-researcher’ contracts that outlined the conditions for both sides of the partnership. This tool, beyond building trust between partners and boosting communication between them, enabled and (in some cases forced) all parties to talk about the assumptions, expectations, and concerns that define conditions for successful and productive knowledge sharing.

Takeaway 4: Inclusion and Diversity Need to be Built into our Tools

One of the lessons shared by Dora Canhos after working with local e-infrastructures in her Virtual Herbarium is that collaboration and inclusion must be baked into the design of infrastructures from the onset. Tools need to promote greater interaction between data providers and data users while they are using them and outlasting them. Alperin reinforced this idea by asking us to keep “the inclusion of local voices, diverse cultures, and different values” in mind when designing new tools for research and knowledge communication.

Canhos’ findings show that building a social network and an active community among users, is more important than developing interactive features through the technology. Nurturing relationships between data providers, ICT technicians, and data users, in such a way that multiple visions and ways of knowing are integrated into a tool or platform, is key for innovation and the development of sustainable knowledge exchange platforms that provide data beyond their intended use.

Alperin also built on the idea of inclusive platforms by describing Open Access cooperative models in Latin America. His research shows that engaging networks of people in the process of building the model are a more efficient mechanism to ensure sustained participation from the non-scholarly public, than what most commercial business models offer. Our commitment to inclusion needs to be reflected at all stages of the research cycle.

Alperin and Canho’s research confirmed that Open Access literature and Open Data are being used by the general public – but who comprises this ‘public’? The challenge of making scholarly knowledge or technical data useful and usable beyond the traditional scholarly communities remains. Although Virtual Herbarium data users consist primarily of scholars involved in biodiversity, Canhos’ findings show that members of the private sector, NGOS, and K12 education are also using biodiversity data in their fields. Alperin’s dissertation also emphasizes the interest and impact of scholarly communications among the non-scholarly public in Latin America, with the largest group of users being students at 50-55%, and 6-9% of users accessing OA journals for personal use.

While this data is not enough to establish that open and collaborative science is benefiting non-scholarly communities, it hints, as pointed out by Alperin, that the uptake of open platforms by ‘unexpected’ users creates a demand for research to be open to the general public. In the words of Dora Canhos “Deciding what should be open and what shouldn’t be open is a process. We can’t make this decision today, but we have to get used to the idea and believe there is value in the idea”. As demonstrated by the session, only a more robust notion of situated science, coupled with a diverse set of voices participating in these processes, can take us there.
Access the speakers’ presentations through this link. Follow Laura Foster at @DrLauraAFoster, Dora Canhos at @cria_amb, Juan Pablo Alperin at@juancommander. For more insights on how Open Science is practiced in Latin America, Africa and Asia, follow OCSDNet at @OCSDNet.