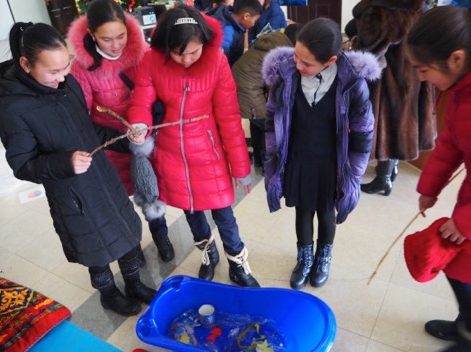 “Through Water”: Promoting and communicating Open & Collaborative Research with a public exhibition

Gradually, we are approaching the end of our project (you can read an earlier post about the project here). To foster one of our key objectives –  improving environmental education and raising awareness about the environment and challenges it currently faces – the project team together with participating schools organized two exhibitions presenting school projects on analyzed water issues, in Naryn (province center in the pilot region) and Bishkek (capital of Kyrgyzstan).

Throughout the project span, a series of workshops and round table events took place with teachers and students from 10 local schools. Together with the KMEECS project team, the teacher/student teams developed, learned and practiced new tools and methodologies to conduct open and collaborative research at the local level. This “citizen science approach”, despite its unfamiliarity, was accepted with high enthusiasm and motivation. As an object of investigation the participants chose to focus on water, a topic of high concern for many villagers, which raised the importance and value of this participatory research project for the villages.

From April to November 2016, the teachers and school students (8th – 10th grades) conducted interdisciplinary investigations and experiments, linking geography, biology, chemistry and physics. To present the results to the public and stimulate the students to continue their efforts, a competition for the best art exhibits using research results was announced. Within 2 months, the 10 schools with support of the KMEECS project team prepared extraordinary and creative exhibits, among which the best ones were selected to be presented during the exhibition named “Through Water.”

The concept of the art exhibition centering on the use of innovative methods and ways of reflection was in itself a novel approach for the civil society living in post-soviet Kyrgyzstan. In this exhibition, visitors were actively encouraged to touch, test, and interact with the exhibits, which is strikingly opposed to the common understanding of a museum or exhibition in Kyrgyzstan: Be quiet and don’t touch anything. The project team together with the participating schools created an art space reflecting on water resources in rural mountain villages of Kyrgyzstan from different angles:

The teachers and students prepared exhibits, which not only reflected the environmental situation in their community and surroundings, but also demonstrated their talents in arts, modeling of their watersheds, acting skills, drawing, social analysis and communication. For example, participants from Ugut village prepared a model of their pond, which is known to have a high concentration of salt. In fact, high amounts of salts can be found in all of the community’s irrigation and drinking water, causing much trouble in their daily life and leading to high degrees of salinization on agricultural land. In their model they set up a lighting system around the pond, whereas the salt water acted as a transmitter of electricity for lighting the small bulbs. As such, they chose to focus on the positive aspects of the salts that surround them, as a metaphor for the energy they get from their environment. Besides telling about issues with water quality, traditional and complex ways of gaining access to water by either pumping, leaking pipes or from rivers and channels, children touched on social topics such as child labor for carrying home the family’s daily water, gender, garbage mismanagement and pollution challenges, sanitation issues related to drinking water etc.

In Kyzyl Zhyldyz village, there is no access to piped water, and for drinking water the community relies on a river that flows down the mountains, coming from gold mining sites. Children are also very concerned with contamination of their drinking water with garbage, so they shot a video story on this topic.

Another school in Minbulak village constructed a wind (ventilator) installation simulating their local environment where carelessly disposed garbage is being carried by the wind into a river flowing through the village. Many schools presented chemical and biological analyses of local water sources. These analyses helped people clarify uncertainties on water quality, as in the case of Ak-Muz village, where people were worrying that their drinking water could be contaminated from a nearby graveyard. The water analysis dispelled their doubt, showing good results. However, they found elevated ammonia levels in another water point, where lots of livestock are grazing upstream. This year, the children would like to focus on testing for ammonia more systematically over the whole grazing period, to monitor if there could be a correlation between livestock numbers and ammonia levels. There are many more examples showing the project’s positive impact and benefits for locals not only for increasing environmental education but also citizen engagement into the investigations and communication of results.

The participating teachers are very active disseminators of their gained knowledge and skills on citizen science for water investigations. A young and motivated teacher says:

“When teaching I used to be limited to theory due to a lack of equipment, but I did not know that with the use of cheap and accessible materials we can conduct fascinating experiments!”

A more senior teacher says that he is very proud of his students who mapped their village online with Open Street Map. In addition, many other initiatives have been emerging: some participants plan village workshops on citizen science activities, others would like to demonstrate their newly gained skills and knowledge at district and province level teachers meetings etc.

The exhibition “Through Water: Citizen Science in Naryn’s schools” opened on December 6 (see opening video here, in Russian) and lasted until December 10, 2016. The project team conducted a wide information campaign on the exhibition: an official opening of the exhibition was held for potential partners, stakeholders, including state agencies and journalists; an announcement on the exhibition was posted in social networks, CAMP Alatoo website and online newspapers; schools were called, inviting them to visit the exhibition with their science classes.

The exhibition visitors were impressed by the exhibition format, as it was interactive and lively: the guests could watch videos lying on the floor, sitting or staying; they could test some exhibits- pouring water into a soil filtration model or a visualization of leaking water pipes, switching on the lights on a pond model; enter installations simulating windy local environments; look at microorganisms in a drop of water and test self-build microscopes form web cameras (introduced to the project through a cooperation with the HONF open hardware project) and laser pointers. In addition, the smallest guests could play in an interactive zone modeling water molecules from plasticine or trying to catch fishes in water contaminated with garbage.

Due to the actual topic of citizen science and creative ways of presenting the exhibits along with interactive involvement, the exhibition had a big numbers of visitors whose ages ranged from 2 to 70 years old. People were impressed by the talents and work of such young children in remote rural areas, who, despite of a lack of financial and educational opportunities demonstrated their ability to create amazing visualizations linking art and science. Many attendees talked about a need to organize more such events for the young generation to draw their attention towards environmental issues and citizen science instead of watching TV and playing Internet games. It is worthwhile to note that there were also a significant number of reposts and positive discussions on the exhibitions through social media channels.

Further, following up on the multiple requests to hold the exhibition in other places as well, the project team is currently developing an open access multimedia eBook on the exhibition to reach a wider public and also to act as an example for replicating this kind of interactive exhibitions on environmental and social issues. Last but not the least, such exibitions will raise awareness about the living conditions of rural areas and challenges which mountain communities face every day even with drinking water – the first need of a human being.

The art/science exhibition is one of the KMEECS project events, which demonstrated very positive impact for disseminating and promoting Open and Collaborative Research Principles. Additionally, there were several activities with partner organizations on jointly conducting short trainings for teachers on the developed water experiments, and also new collaborations on citizen science and education are being discussed and planned. The KMEECS project has also been showcased as an innovative approach for science literacy and environmental education on the regional as well as global level (see e.g. here).

CAMP Alatoo, the lead organization of the KMEECS project, has also integrated the environmental education component into its joint regional project with GIZ (Deutsche Gesellschaft für Internationale Zusammenarbeit) – Ecosystem based Adaptation to Climate Change in High Mountainous Regions of Central Asia. Building upon the KMEECS project’s experiences, plant phenology and climate change were selected as the next topics for citizen science research and activities with local schools. A manual on plant phenology will be developed and further disseminated across the region.

Citizen Science is a very young approach in Kyrgyzstan but it is slowly and steadily expanding its reach to the public. There is a high interest and motivation to promote, practice and develop environmental education and open and collaborative research for fostering local-level development. Although preparing the exhibition was linked with a tremendous amount of work, it’s success shows that it was well worth it. So yes, we would do it again! And hopefully there will soon be a next opportunity to again dive into the design of an interactive experience combining citizen science, art and communication.