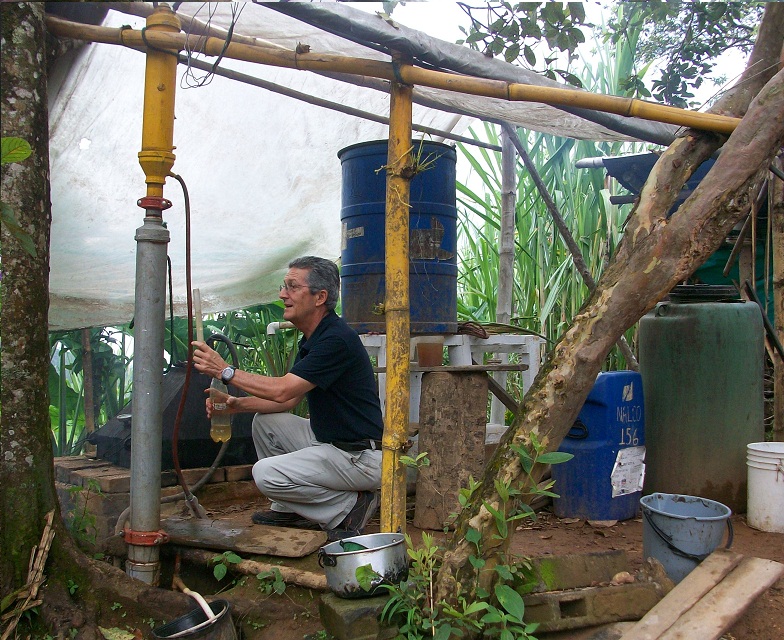 The Meeting of Two Worlds: Combining Traditional and Scientific Knowledge

The case Biofertilizers and Biofuels of ‘My Land’, Colombia

The project ‘Biofertilizers and Biofuels of My Land was born five years ago in Fresno, Tolima, a province located in the traditional central coffee belt of Colombia, that aims to find uses for the byproducts of the production of coffee and panela (brown sugar), two of the most common crops in the area. It was led and funded by Karisma Foundation, in partnership with the University of Tolima, the Coffee Cooperative CAFINORTE, and the Provincial Committee of Coffee Growers, all of which have provided their resources, networks, and services to the project. 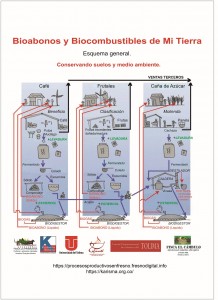 A central objective of the project is to produce everything at a ‘local scale’. This involves relying on local natural resources for the production of fertilizers as fuel, as well as on the traditional knowledge of community members. This article identifies some situations where traditional knowledge has played an important role in the proper development of the project. It also mentions conditions in which local conditions can be improved with the support of scientific knowledge.

1. Situating knowledge about ‘fermentation and distillation’ in Fresno

As in other parts of Colombia where sugar cane is grown, and panela (also known as brown sugar) is processed, it is traditional to ferment the panela to produce a drink of low alcoholic content (5 degrees of alcohol), somewhat similar to beer, called “guarapo.” This drink is traditionally consumed in the houses and farms as refreshment during work hours or for recreational purposes in local celebrations. A stronger “informal” liquor is also produced by distilling the juice to a higher alcoholic strength (25 degrees of alcohol). The basis for the fermentation liquor is what is known as “cunchos” -yeasts prepared from rice, corn, parsnips and brown sugar, made by local experts in the area, using very basic equipment. 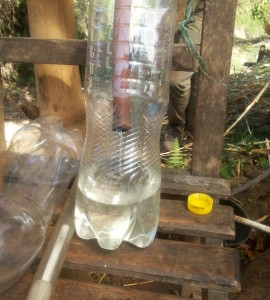 These traditional practices have generated the relative diffusion of empirical knowledge about the fundamental principles of fermentation and distillation. While this knowledge may be considered by some basic, it is by no means negligible, especially for those who are aware of the local conditions in which local farmers work, which, as we said – is a focal point of project development. Their practical experience in these processes has allowed our initiative to count with their expertise for regular consultations and recruitment for experiments.

More recently, the local University of Tolima became engaged to document the implementation of the project and provide recommendations to improve processes in the future. Interestingly, this situation of relying on traditional knowledge and local institutions has helped to integrate the project into both the social fabric and production processes of local farms and communities in the area.

When the fermentation of byproducts was proposed, it was not an unknown process to local community members. It was mostly known by people who have accumulated experience and traditional knowledge on fermentation. However, this knowledge had to be often complemented by scientific knowledge from various sources.

During the first phase of the project, we conducted a pilot to test the fermentation process using polyethylene bags and special yeasts produced in Switzerland (provided by John Lock, who directed the pilot). The temperature in Fresno was at all times within the ranges required to work with yeast, and the pilot was successful. Other tests were made using locally available resources, such as plastic containers and bread yeast readily available in local bakeries, which also lead to successful fermentation. The steps behind why the second process was as successful as the first were not fully understood. We relied on traditional knowledge but had to resort to the internet to investigate the fermentation processes that had taken place and how local conditions had influenced its success. Initially, we only obtained information about “industrial” fermentation processes. A milestone in the project was when in the research process we came across the book “The Art of Fermentation” by Sandor Ellix Katz. Only then, we could understand what had happened process and make meaningful connections for the rest of the project.

The project also counted with the support of a local expert on ‘cunchos’ who highlighted the importance of exploring fermentation processes with different types of yeasts and provided his knowledge about yeasts that produce higher alcohol percentages than bread yeast. This discussion was enriched by a study conducted by the National University in Manizales, that compared the production of alcohol using bread yeast and a different type of yeast found in the municipality of Irra. The study states that the yeasts found in Irra produce significantly more alcohol than bread, confirming our need to continue exploring and consulting scientific knowledge. 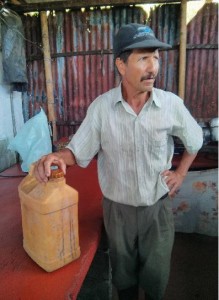 The area also had experience with distillation due to the production of informal liquor (25 degrees of alcohol). However, given that our project wants to produce biofuel out of alcohol with a higher degree level, we had to go beyond what the traditional knowledge offered us.

We found the adequate distiller for our purposes via the Internet, developed by a community of distillation enthusiasts in the United States who have been collaboratively developing several models of distillers for more flexible uses. All information about this equipment was available online – open knowledge documented for and shared to all. 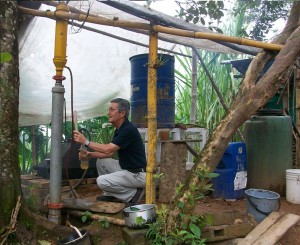 [Hector Botero from Karisma next to distiller mounted in El Guayabo]

Nevertheless, we still had to consider local conditions in the construction of the distiller. The development raised two issues. First, the material to be used. The proposal was to build it in copper or stainless steel, which involved hiring a team with a very high cost. This was not viable because one of the premises of the project was to work with low-cost equipment that ensured the local sustainability of the project. Second, space – the distiller would be placed where the panela is produced -open spaces without much security space and with a high risk of theft. These costs generated questions about the funding and social viability of the construction.

To meet these challenges, a galvanized iron pipe was proposed by local engineers as a more sustainable alternative. The construction was less traumatic than expected and the first version of the distiller worked well from the first test. Each new version included changes to improve the performance or to resolve problems identified through local consultations.

4. The Use of the Products

The success of the transformation processes is determined by whether these products can be used adequately and locally. In the case of this project, the products have so far been used mainly for two purposes: for kitchen fuel and 4-stroke and 2-stroke motorcycle engines.

The use of alcohol in the kitchen did not represent many challenges beyond checking the availability of devices conducive to this type of fuel. Other than that, the use of fuels in the kitchen is common in the area.

In regards to the use of engines, the main challenge was the lack of information about the implications of the use of these fuels. Using the Internet, we came across Leonardo Estigarribia, an individual working in a company producing bioethanol in Paraguay and running his motorcycle on bioethanol. We contacted him, and he provided a carburetor for 4-stroke motorcycles adapted to the use of alcohol. The next challenge was to convince local mechanics to use this carburetor in local bikes. Trials with bioethanol produced within the project in 4-stroke motorcycles, and they have been so far successful. 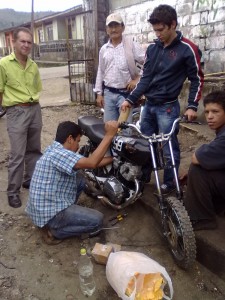 In the case of 2-stroke engines, we have run trial/error tests. Finding adequate conditions to utilize bioethanol in this type of engine has interesting implications. The cost of 2-stroke engines is lower than the cost of 4-strokes, but they currently produce a high level of pollution. If a cleaner burning fuel is achieved through bioethanol, this is not only essential for pollution reduction, but also creates opportunities to use cheaper 2-stroke engines for agricultural use.

As noted above, a core objective of the project was to maintain the project at a ‘local scale’, and ensure that it is integrated into the social fabric and the productive agrarian processes of the area. As the project depended on traditional knowledge and remains adjusted to local conditions, we can claim it has achieved these objectives.

Some key ideas to highlight:

Since the project has managed to demonstrate its feasibility and established the local conditions that make it possible, it is interesting to see how scientific knowledge and the relationship with the University, have been mediated by local traditional knowledge and the relationship with the local community. It is the traditional knowledge what has defined the conditions under which scientific knowledge is used to advance the project -not the other way around.

During this stage, we realized there is no documented information on traditional knowledge. It will be a priority in the next phase of the project to continue carrying out this work of documentation with the support of the University and scientific knowledge. This would help maintain, review and improve knowledge, not only to develop similar projects but also to inform others who are on a similar journey. At the same time, traditional knowledge is offering new ideas to scientific knowledge that are more contextualized to the agrarian reality of family farms in Colombia, improving its ability to be used and applied to improve local conditions.

We have also recognized that we will be able to identify the aspects that require the further support of scientific knowledge after reviewing and reflecting on the experiences and lessons learned in this project. This makes the next phase of the project independent of the criteria defined by scientific studies, and instead dependent on our experience. However, it is important to note that our ability to use scientific and external knowledge in this project relied on our ability to access affordable or free open knowledge online.

Moving forward, we have identified priority issues for the next phase of the project. We will start by documenting, reviewing and making proposals on how to improve the fermentation process. This will be followed by considering the distillation process and identifying opportunities for improvement. We will document the uses of what we produced and examined what the community is doing with them. This will inevitably arise proposals and ideas to improve these aspects.

Finally,  the legal policy framework for production and use of alcohol has to change. For health and safety reasons, Colombia has historically developed regulations that virtually prohibits the artisanal production of alcohol. When the rules were defined, alcohol was not used as fuel, and when the conditions to produce fuel were incorporated into legislation, only industrial output and large volumes were considered. We will identify options available to communities to influence the legal framework which has been designed by and to benefit the industry, rather than local needs and priorities.

Hector Botero comes from an engineering background and conducts research with Karisma Foundation. He has investigated different applications of technology in various contexts, including management and education. Contact him at: hbotero@karisma.org.co

Karisma Foundation is a civil society organization dedicated to supporting and spreading the good use of technology in digital environments, social processes and public policies in Colombia and the Latin American region, with the objective of protecting and promoting human rights.