This project aims to analyse under which conditions open and collaborative scientific networks have the ability to cooperate in the effective use of the knowledge produced to attend specific social problems.

The definition of a social problem normally entails certain “legitimate,” “natural,” or “rational” solutions, and exclude others which are not. When the definition of a problem is complex or too extensive, scientists can become enrolled in order to vindicate a certain orientation in the definition of the problem and to exclude or downplay the others (Kreimer, 2011). In recent years, the traditional circumstances of worldwide knowledge production have been dramatically modified. Globalization processes taking place in science—together with the formation of larger research networks—generate, at once, risks and opportunities in peripheral regions. On the one hand, research capacities in peripheral contexts may be empowered by the formation of South-South networks. These new collaboration patterns for the south allow research in peripheral societies to do away without the direct intervention of hegemonic research centres, whose perception of social needs and demands in southern contexts is absent or distorted.

Risks, on the other hand, may still arise through a series of processes that we identified as cognitive exploitation. This concept entails a relationship by which certain knowledge outputs, originally generated from non-profit objectives, become ultimately appropriated and turned into a source of profit by a different set of stakeholders (Kreimer & Zukerfeld, 2014). In this way, open and collaborative science is particularly prone to the risks of cognitive exploitation.

Qualitative and quantitative techniques have been used including “following the actors” (following the research groups at the different loci of knowledge production) to conduct in-depth interviews to assess motivations, facilitators, and constraints; and bibliometric tools to track the evolution of the fields (dynamics), finding shared actors that appear in consecutive periods. Whereas traditional bibliometric analysis has chiefly relied on co-citation analysis, we are working with new resources such as bibliographic and heterogeneous coupling methods that also allow us to explore the cognitive and the semantic contents of the papers being analysed. Data obtained with these methods provide a better account of “disciplinarity cohesion”. Emerging dynamics will be further understood by applying graphic analysis to the complex datasets obtained from cross analysis of shared references. This will allow us to map the spatial and temporal dynamics of the networks, to identify the participation of non-academic actors in publications, and to assess co-authorship in quantitative (intensity) and qualitative (thematic) terms. Finally, we integrate the data obtained to also observe the articulation of the networks in terms of the actors’ motivations: whether they respond to institutional policies or regulations, to the relationships with other actors to industrialize knowledge, or to other factors that operate as stimulus for the formation of networks. This will be contrasted with the analysis of (discursive) network objectives, the goals of the funding agencies or institutions that sponsor them, and the overall funding structure.

Our particular context in development (Argentina, Brazil and México) seems to be a constitutive factor in both shaping the issue and proposing solutions. In at least three of our four case studies, for instance:

All that glitters is not gold: rethinking openness from the affected population of a cyanide spill in Jáchal, Argentina

May, 3 2017 [En español abajo] by Juan Layna and Emiliano Martin Valdez of the “Can OCS Meet Social Needs?” Project Summary: In previous posts, we ...

Beyond openness: use of knowledge and public issues in non-hegemonic contexts

We have set up the open library/repository for publications within the field of Science, Technology and Society. The library aims to share, invite other to contribute and make readily available all the Latin American publications and papers related to the field of STS studies (including drafts, pre-prints and such) whenever possible. 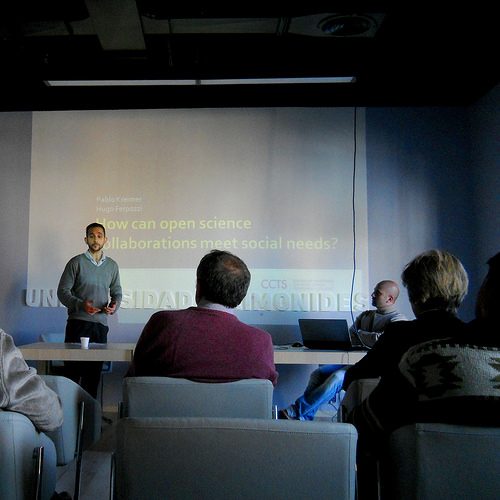