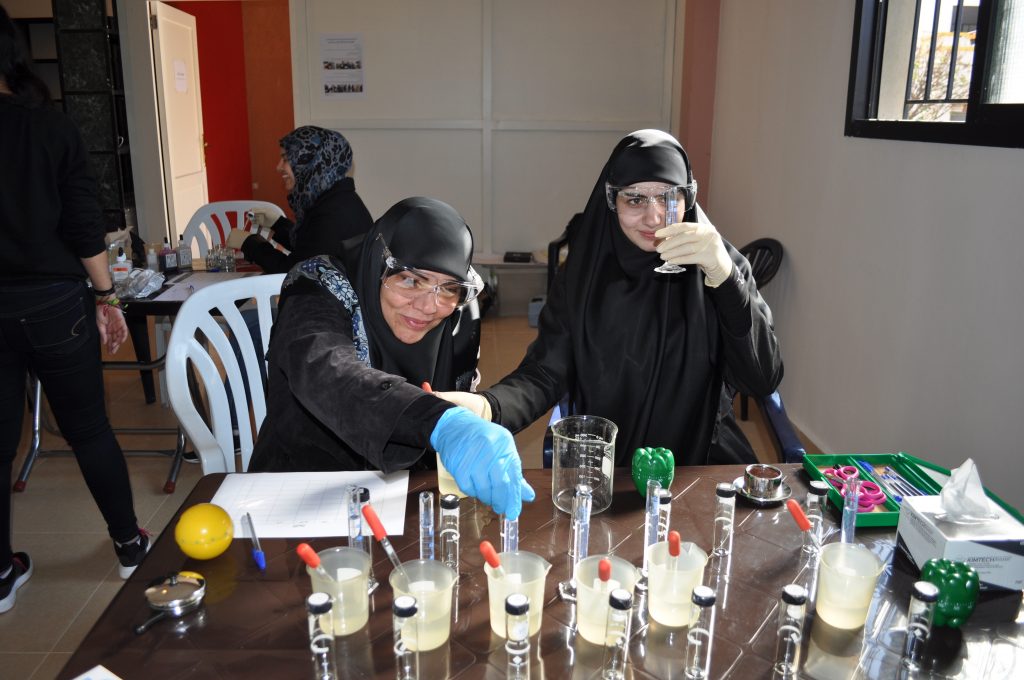 Our goal is to study the process by which knowledge generation and scientific evidence is shared with communities so that people may be enabled to take local action in order to effect changes most suited to their needs. The specific aims are:

Participatory community based water quality sampling, assessment and monitoring schemes for lakes, streams, rivers, catchments, and reservoirs have been implemented in several locations across the northern hemisphere (Au et al. 2002, Overdevest & Orr 2004, Burgos et al. 2013, USEPA 2014, Latimore & Steen 2014), Australia (Nicholson et al 2002) and, to a lesser extent, in a number of developing countries (Deutsh et al. 2005, Nare et al. 2006, and Nare et al 2011). Public participation has been the core of the Community Based Development project that the AUB Nature Conservation Center (NCC) has experimenting with for the last 3 years.  With the help of Municipal Councils in 55 villages across Lebanon, the team at NCC has developed a village “Green Map” database. It consists of spatially overlapped aerial photographs and valued (as determined by the community) landscape components through a nationwide public participation Geographic Information Systems (GIS) process.  With this approach, the benefits and limitations of the method for stock taking of baseline information for landscape planning was evaluated and significant sustainable management systems of communal lands and their spatial associations in relation to the mapped landscape components were identified. This methodology has built trust between academic institutions and communities, which has decentralized the process of map making and village perception, information generation and made it more relevant to local communities to manage their natural resources.

Considering the success of the Green Map model, this project aims to add GIS layers of information on water and air pollution in the search of appropriate solutions to increase economic and environmental benefits (CBD, 2010).

The participatory approach was adopted during the selection of water testing locations and water quality testing and the quantitative approach was used to evaluate water quality data collected by participants. Water quality tests were further repeated in the laboratory and a comparison between the two sets of data (generated by participants and laboratory technicians) was made to evaluate accuracy of data generated and equipment used. Also participants’ perception of water pollution problems and the ability to develop remedial environmental solutions was evaluated qualitatively.

One of the challenges was related to convincing participants of the need to conduct blind tests. This is a routine procedure adopted by many analytical laboratories to ensure high objectivity in the tests and the analyzed results. In this particular case, samples from the seven wells were given a code so that participants concentrate on the experiment without any prior or post judgment of the quality of the private and public water sources.

A second challenge was our inability (lack of preparedness) to perform biological testing (fecal coliforms and E. coli) with village participants because the experimental procedure requires complete sterilization of the equipment. For this particular test, water samples were transported to the University-laboratory for analysis. This is one of the important tests that define the quality of water. Citizens were very eager to learn this particular tests and the AUB team worked hard to put together transportable and disposable sterile kits that will be used in the second phase.

Sharing the results of the winter tests was also a challenging task. The bacteriological tests for two of the wells, one private and the other public, did not fall within the range recommended by the Lebanese potable water standards. Results of the private contaminated well were shared with the owner and corrective measures will be implemented. Mitigating the problems associated with the public well is not straight forward as this well is tested and managed by the South Lebanon Water Governmental Authority and the Ministry of Health. As such, any corrective action on this well has to be done in coordination with the government. A follow up on this issue has been initiated by the local municipality and with the help of the AUB team.

Citizens identified the water contamination problem in their village and are eager to learn and adopt the scientific approach in order to reach a solution that will reduce their spending to buy water for their daily use. Citizens learnt the experimental procedures, conducted field water tests, and discussed their findings with the AUB scientific team in an interactive workshop. During the workshop, citizens took an active role and discussed possible solutions. As a result of that, they are following up with legal authorities to re-test the contaminated public well and re-open it in case no major contamination is found. In all these steps, officials from the municipality sought the help of Rima Baalbaki; the senior coordinator of the project. She has assisted them in complying with legal procedures including filling out the necessary documents, contacting the public officials, and supervising the water sample collection in order to have the water retested.  She is also communicating with the laboratory designated by the government to have a copy of the results so she can share it with the community.

The Sustainable Development Goals (SDGs): A Call for Action Research at the Nature Conservation Center at AUB (AUB-NCC)

August, 4 2017 This project is a case study that exemplifies the principle of “Sustainable Development” in the recently launched Open and ...