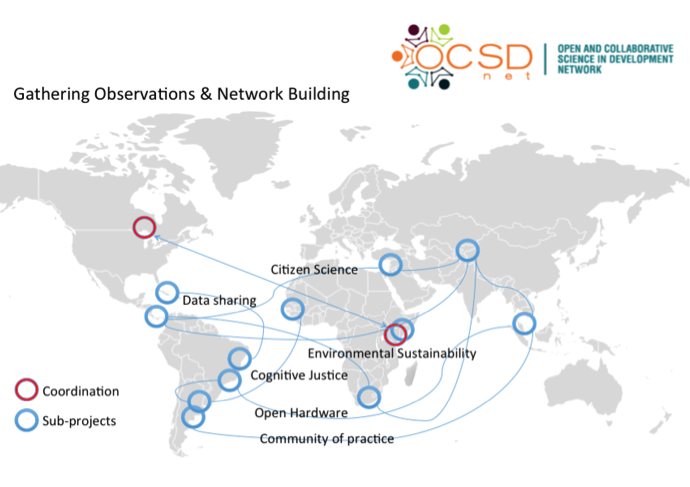 The Open and Collaborative Science in Development Network (OCSDNet) officially launched on October 15, 2014 at the iHub, Nairobi’s innovation space for the technology community. OCSDNet has since then awarded 12 sub-project grants representing 26 countries in the Global South (3 proposed projects from Sub-Saharan Africa, 1 from the Middle East, 1 from the Caribbean, 4 from Latin America, and 3 from South, East and Central Asia). The projects all largely began activities in March 2015. Details of each project and the full proposals are available on the OCSDNet website: http://ocsdnet.org/projects/.

The sub-projects allow us to begin gathering observations on whether, and if so, the conditions under which open approaches to research and collaboration could lead to various development outcomes in the Global South. The selection of case studies was guided by a hybrid framework derived from the Institutional Analysis and Development (IAD) framework (developed by Elinor Ostrom and colleagues) with integrated theories and models from related areas of openness studies, including Open Source, Open Access, Open Educational Resources, Open Data and Open Innovation. This integrated framework serves as our “Theory of Change” (ToC) that guides the continual design and development of the network. The ToC also informs an on-going development of an evaluation framework for the sub-projects, to assess the overall effectiveness of the network. More information on our TOC available here.

The specific objectives of  OCSDNet are to:

Towards Objective 1: “Support new projects and activities so as to generate evidence on whether, and if so, under what conditions open approaches to science can enable research that contributes to development goals in the Global South.”

After receiving 91 concept note applications from across the Global South, and selecting 14 shortlisted projects for the full proposal development workshop held in mid-October 2014, we have awarded 12 sub-grantee projects. The project sub-grant agreement documents were largely signed in February 2015 and most project activities commenced in March 2015. As the coordinators, we have also been helping to link some of the projects with relevant initiatives and opportunities such as  EIFL (Electronic Information for Libraries) and Center for Open Science.

In designing and implementing M&E approaches for the network, the Coordination Team has sought to use a methodology  called ‘outcome harvesting,’ which focuses on the continuous collection of data in different forms, throughout a project’s life cycle. This is different to most forms of project evaluation, which tend to focus on monitoring pre-established indicators at set intervals – such as quarterly or annual cycles, with most evaluation being performed at the project’s completion.

Towards Objective 2: “Build a community of open science practitioners and leaders in different contexts, by nurturing an interactive research network.”

The OCSDNet network website gathers greater traction and has begun being used for dissemination of content from subgrantee projects. In the following months, the OCSDNet Team will continue to encourage widespread participation by organizing e-conferences to stimulate various discussions around relevant issues arising from the projects. The OCSDNet social media platforms continue to gain traction with over 390 followers on Twitter and 353 Likes on Facebook (statistics from June 2015).

The network has begun to organically facilitate linkages across the different projects. Some of these emerging linkages include:

•    Several individuals from different projects and areas of the world have been corresponding in regards to the possibility of a joint Side Event at the United Nations Framework Convention on Climate Change (UNFCCC) at COP21 in December 2015.

•    A workshop hosted by CONICET to be held in June will include two other OCSDNet project representatives based in Latin America: CENIT/STEPS and IBICT.

•    A “Maker” workshop to be run by HONF (in South-East Asia) in September 2015 will include OCSDNet project representatives from Camp Alatoo/UCA, based in Kyrgyzstan.

One of the sub-grantees has explicitly said,

“Belonging to a network helps to explain the whole philosophy and makes our project more interesting for people. It was good to have a few exchanges in the region, including a conversation on Skype with Mariano (CENIT/STEPS), and we have reused a part of their flyer for our presentation because it gives, in our opinion, a clear illustration of what is ciencia abierta (open science, in Spanish).” 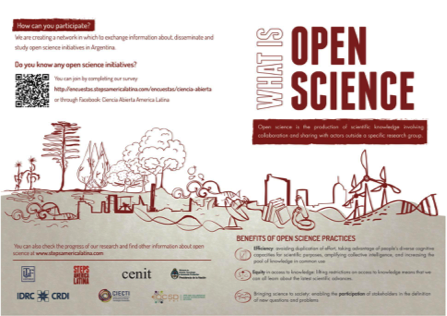 At the same time, other members of the network stressed that the collaboration was very important for demonstrating the legitimacy of their research as well as the importance of OCS as an emerging field of study, “Having this reputable network helps to get the buy-in/support from important stakeholders.” Others commented that the ‘openness’ of being able to see all teams’ monthly reports, “It is nice to see the reports written by the other OCSDNet teams, so that we can somehow take part in what everyone is working on/struggling with.”

Towards Objective 3: “Identify the structural, technical, policy and cultural barriers for individuals and organizations to participate in OCS and determine how these barriers could be addressed.”

From monthly progress reports received from the sub-grantees, we have been able to extract a set of arising risks, some of which seem to be shared among a variety of the projects. A few of the projects are starting to flag a number of issues that are not fully understood in the context of Open and Collaborative Science – including how the sector interacts with themes of gender, disability and ethics, to name a few. These issues and the ones identified below all require further articulation and analysis, as more findings and reflection emerge from the sub-projects:

•    Working ‘openly’ and ‘collaboratively’ can be time-consuming and resource intensive

We have also noted a risk of duplication of data repositories. OCSDNet is working together with the Confederation of Open Access Repositories and The Latin American Council of Social Sciences (CLACSO) to put together a proposal on using existing repository networks around the world to serve as the platform for open research and dissemination.

Towards Objective 4: “Contribute to the building of a new and vibrant area of study (OCS), producing knowledge to inform policy and practice, and a community of researchers who identify themselves as working on OCS for development.”

One of the key learnings that has emerged is the importance of considering openness as a ‘mindset’ or an attitude. ‘Openness’ cannot merely be confined to just one area of work or life, but is instead a concept that is complex and multi-layered, an emerging philosophy that seeks to create a new system of research and dissemination based on transparency and collaboration. As one of the sub-grantees neatly describes:

“We feel sometimes all this openness discourse is mostly about software and online networks. But, what we really need to do here in the field is to work on “attitudes”. It takes time. Been reflecting a lot about the importance of promoting the right mindset, a change of attitude toward science (more openness in the community to the elites and scientists, and more openness in the academia to sharing and co-creating with the community). And how a lot of this comes from our 10+ years of having been educated in a formal schooling system. So a more open education in all senses is key. Openness is really a mindset.”

In terms of next steps for the network, one outcome of the ICTD2015 conference was a clear need for an OCS manifesto. During discussions with project teams in attendance, several OCSDNet members indicated challenges in explaining the OCS concept in everyday language(s) to their research participants and communities. The creation of a manifesto for the network, generated through collaborative e-debate and joint writing sessions with sub-grantees, would help to lay out the explicit vision for the network, as well as further articulating and refining our shared understanding of just what is open and collaborative science. Once we have a draft outline of the manifesto created, we will put out a call to the wider Open Science community for debate and endorsement.

More details on the network’s progress are available in the full report available for download here.

We welcome your feedback and questions in the comments section below.