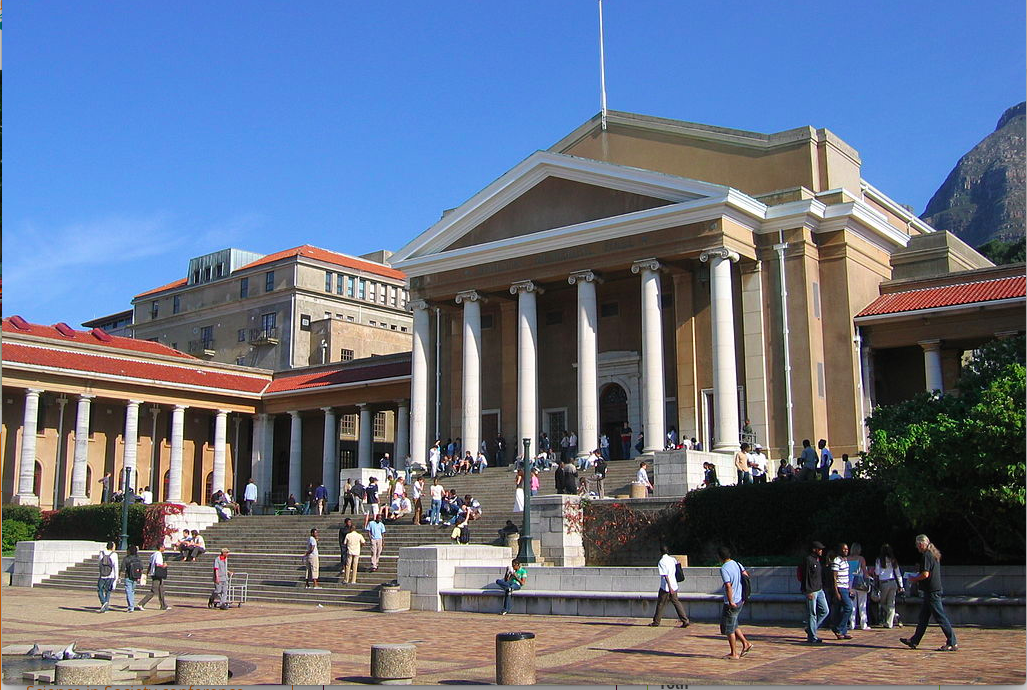 •The ‘Empowering Indigenous People and Knowledge Systems’ project has sought to use participatory research methods to minimize power relations and blur the lines between ‘researcher’ and ‘researched.’

• However, international collaborations between institutions with different ethical review boards has led to conflicting priorities and understandings for ‘protecting’ indigenous peoples and knowledge.

• Therefore, the team has found that while institutional review processes may have the potential to disrupt and dismantle power relations through iterative dialogue and ongoing conversations around ethics, they can also serve to solidify and legitimize these relationships when used instrumentally.

•Researchers pursuing the use of open and collaborative research processes should begin by understanding these complex tensions that shape and are shaped by the production of knowledge.

The “Empowering Indigenous Peoples and Knowledge Systems Related to Climate Change and Intellectual Property Rights” project is using participatory action research (PAR) design and methods with the aim to reduce the power relations within and between researchers and researched. The project is a collaboration, between four groups based in two countries: Natural Justice (NGO in South Africa); the Intellectual Property Unit, Department of Commercial Law, University of Cape Town (academic institution in South Africa); and the Department for Gender Studies, College of Arts and Sciences, Indiana University-Bloomingon (academic institution in United States); and particular indigenous communities in South Africa. This diversity of countries, institutional types, and individual institutions results in a diverse set of regulations that need to be adhered to in order to implement the project. Whilst establishing the appropriate structures to implement the project, we decided to reflect upon the process itself and how the different regulations may influence power dynamics within the project. Specifically, we reflect here on the process of human subjects research approval from the Institutional Review Board (IRB) at Indiana University Bloomington (IUB) and Research Ethics Committee (REC) at University of Cape Town (UCT). 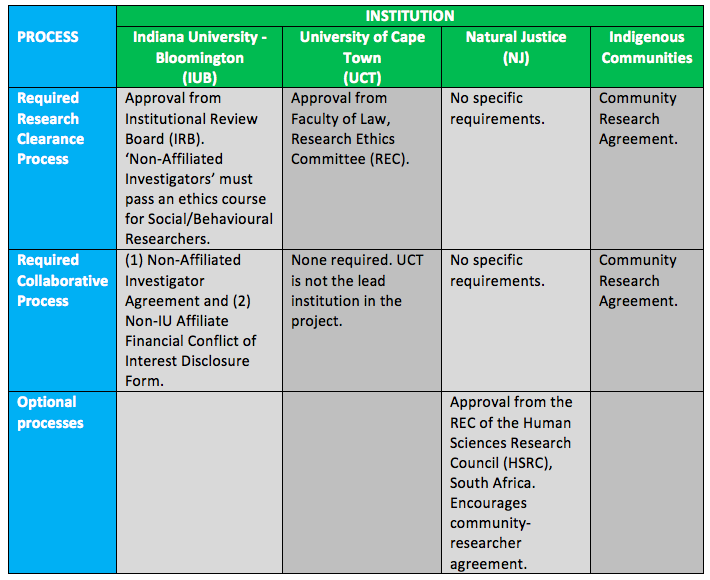 Indiana University has the most extensive requirements. Researchers were required to submit a human subjects research proposal to the IRB for approval. Researchers not employed by IUB (i.e. ‘Non-Affiliated Investigators’) were also required to review the Belmont Report: Ethical Principles and Guidelines for the Protection of Human Subjects of Research and the U.S. Department of Health and Human Services (DHHS) regulations for the protection of human subjects.

Additionally, they were asked to sign a Non-Affiliated Investigator Agreement where signatories agree to comply with the standards stipulated in the above documents; to comply with other National, State, or local laws or regulations that provide additional protection for human subjects; and to abide by all determinations of the IRB. Non-Affiliated Investigators were also required to pass a Social/Behavioural Researchers ethics course. The course included modules on history and ethics, informed consent, privacy and confidentiality. Content was relatively general and mostly U.S.-specific focusing for example on reviewing principles from the Belmont Report and U.S. federal regulations.

In contrast, UCT required submitting an application to the Law Faculty’s Research Ethics Committee (REC) and gain approval through ethics clearance for research involving human participants. The REC reviews all research proposals that intend to gather data from or about living humans and makes the decision whether to grant ethics clearance or to require amendments or clarifications to the proposal. The primary role of the REC is educative rather than policing. The REC’s work is guided by UCT’s Research Ethics Code for Research Involving Human Participants. This process required, among other things, submitting a human subjects research proposal that we modified from the one submitted to IUB. Our application was approved after a face-to-face review meeting.

Natural Justice, does not have a history of formal academic research with human participants. Thus, it has not developed a specific institutional policy, rather Natural Justice advises scholarly researchers engaged with human participants to voluntarily apply to the REC of the Human Sciences Research Council (HSRC) of South Africa. The HSRC advises that if the project team involves academics not from the HSRC, then the proposals should be reviewed by the REC associated with that person’s academic institution – in our case those of UCT and IUB. Natural Justice also encourages the development of community-researcher contracts, the purpose of these is to ensure that all the communities intellectual property is controlled and protected in accordance with South African laws and policy, and relevant international laws.

REFLECTIONS ON THE ETHICS APPROVAL PROCESS

The university ethics processes had interesting outcomes. UCT’s ethics processes are decentralized, with the Faculty of Law responsible for reviewing applications for human subjects research from its own faculty. The REC review committee was less rigid and formalistic than IUB. They facilitated a conversation between the researchers from UCT and NJ. They asked many questions that reflected their appreciation that employing PAR methodologies meant that it was impossible to foresee all possible problems. The REC review committee stressed that the key in this case was that researchers be sensitized so they can identify any problems early, and if necessary, they should revert to the committee for additional advice as required. Their approach was to facilitate a conversation, where they explored issues in depth and also identified where they could be of greatest assistance. The project is interdisciplinary and not typical of the methodologies that the REC usual sees within the Law Faculty.

In contrast, the IUB process was more formalistic and legal in form. Human subjects research is governed by precise statutory regulations in the United States that define the parameters of working with human subjects. Researchers with the project were required to submit a research statement that defined the scope of the project, provided a description of subject population, and set out procedures for recruitment and informed consent. The proposal spoke to how researchers were going to protect human subjects and make them aware of the risks and benefits of engaging in human subjects research. The application was more formal than the UCT process. Researchers submitted a human subjects research statement that responded to precise questions from the IRB review committee in advance. Questions flowed from the precise language of statutory provisions under U.S. federal law.

Upon review, the IRB committee worked with researchers to ensure adequate procedures were in place to protect human subjects. This created tensions, however, with the collaborative nature of the research project and its PAR methods. For instance, researchers sought to deploy PAR methods to position indigenous peoples as not only human subject participants, but also collaborative co-researchers. The goal was to challenge hierarchies of knowledge production and expertise by involving indigenous peoples in the design of the study procedures and research process. PAR methods have their limitations, but researchers sought to deploy PAR as a way of generating a more open and collaborative knowledge production process.

However, when IRB officials at IUB reviewed the application they were confined by the strict protocols of the IRB process and its legal regulatory structure, so they were forced to reject these political moves. IRB officials recommended deleting indigenous peoples’ histories as superfluous. They also insisted that if indigenous peoples were listed as co-researchers they would be required to submit non-affiliated investigator agreements and complete the compulsory ethics course. This was an unrealistic expectation. We work with particular indigenous communities that have tremendous demands upon their time and fewer opportunities for formal education. Alternatively, IRB officials asked us to specify indigenous peoples as focus group leaders – a move that continues to reinforce indigenous peoples as merely providing data, rather than as experts.

Through the IRB process we are finding that collaborative scientific research is facilitated, but also hampered by the regulatory processes that structure how human research subject is designed and carried forth. The IRB process serves to disrupt power relations between researchers and researched by ensuring the protection and informed consent of human subjects. At the same time, however, it secures power relations in its continued line drawing between expert researchers who produce knowledge and vulnerable subjects who produce mere data. Efforts towards more open and collaborative research process should begin by understanding these complex tensions that shape and are shaped by the production of knowledge.