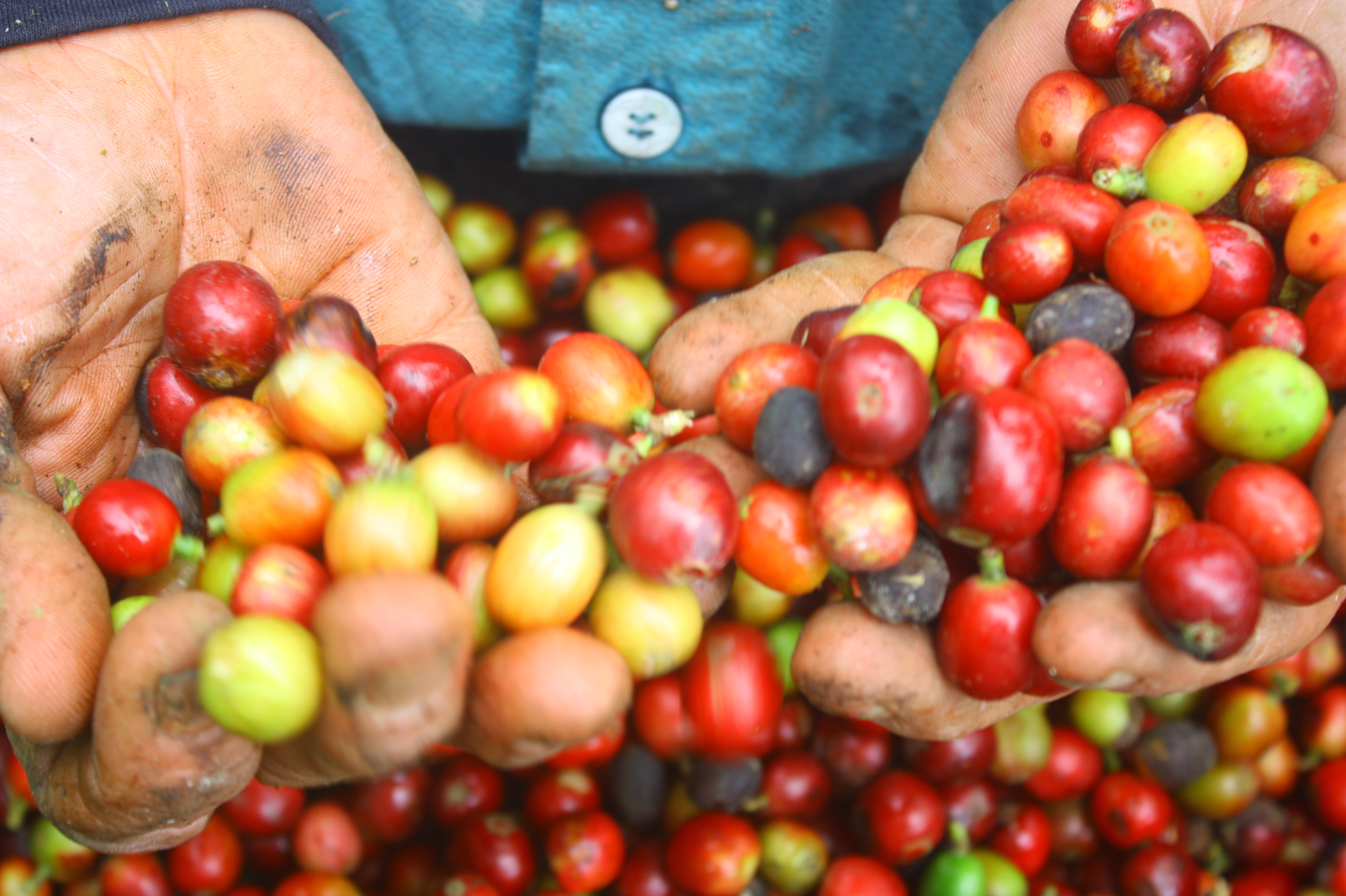 By: Denisse Albornoz and Josique Lorenzo

In a recent post we described the experience of OCSDNet members: Leslie Chan (OCSDNet Principal Investigator), Denisse Albornoz (OCSDNet Coordination Team) and Josique Lorenzo (Project sub-grantee, CATIE) at the seminar on Ciencia Abierta (Open Science) at the UTP (Technological University of Pereira) in Colombia, where they met with scholars, organizations and community leaders advancing open and collaborative science to tackle development challenges in the region.

This second post, written collaboratively by Denisse Albornoz and Josique Lorenzo, will describe the lessons we brought home, what they mean for the OCS in Development field and how they will be addressed by OCSDNet.

Colombia is one of the richest countries of the world in terms of biodiversity (photo: Josique Lorenzo)

Introducing concepts of Open and Collaborative Science to an audience who was completely unfamiliar with the concept was quite a challenge. Although the community hosting the seminar was eager to explore what OCS meant for research, innovation and development in a knowledge-based economy, it soon became clear that Open Science could not be defined without tying it to local motivations, incentives and ideologies. Identifying these and examining the political, cultural and social conditions under which Open Science becomes attractive for scientists and researchers is the first step towards examining its local relevance.

Three themes stood out in the Colombian context. The first was biodiversity management and conservation. Most speakers, including Martha Giraldo, Jorge Orejuela, Josep Pintó and Josique Lorenzo, framed OCS as an important practice to generate knowledge and participatory programs geared towards the protection and valuing of biodiversity and the environment. They made an explicit connection between OCS initiatives such as open mapping, citizen science and participatory action research as key activities to capture the ways in which environmental degradation is affecting the economic and social life in Colombia and make visible the symbolic and cultural value it has for many of its communities.

“[Bio-diversity] is one of the biggest ways in which Open Science is becoming relevant and interesting for communities in Colombia” Pilar Saenz, Fundación Karisma

The second theme was the peace and post-conflict reconciliation process. John Mario Rodriguez, professor at UTP and coordinator of Risaralda Model Forest, powerfully situated ‘openness’ in Colombia’s current moment in history, as the state approaches the end of a 50-year-long gruesome war with the FARC. He reflected on how a philosophy of openness could speak to reconciliation processes that include the painful visibilization of memories of violence.

“How can openness help us produce knowledge to deal with the upcoming challenges of the post-conflict era?” John Mario Rodrigues, UTP

This theme is particularly relevant in highly politicized contexts. Could open research practices produce knowledge to challenge the strategic closure of key information by institutions and dominant political groups? Could collaborative knowledge production help restore the social fabric of the nation moving forward? These questions had a deep echo in the room, and signalled the complexity of negotiating tenets of openness, such as transparency and the democratization of knowledge, with political conflicts.

The third theme was the recognition and appreciation of ancestral and indigenous knowledge(s). As exposed in Jorge Orejuela’s presentation, while there is an intention to use OCS practices to facilitate the exchange of knowledge between Afro-Colombian and indigenous groups, as well as raise awareness about threats to their livelihood; many communities still look at the open sharing of knowledge with suspicion.

“Citizen science is being integrated with community knowledge – and these are determining processes of cultural survival and territory defence” Jorge Orejuela, University of Cali

The extraction and patenting of natural resources and local knowledge by Northern institutions has threatened the survival of indigenous communities in the Global South for decades; openness could in many ways exacerbate their exposure and hence vulnerability to these practices. Can open and collaborative science promote the opening up and protection of indigenous knowledge simultaneously? If we are promoting a culture of sharing, how can we also promote a culture of respect in this sharing, such that we establish safeguards and governance structures that honour these boundaries?

How can OCS bridge the divide between communities of practice?

After the seminar, we visited Belen de Umbria and attended Open Science workshop (part of the OCSDNet project – Improving Adaptive Capacity with OCS) in which community groups presented proposals for climate change adaptation projects. Values of collaboration, inclusion and participation were at the core of their proposals, yet their articulation of open science felt foreign. It seemed more of a placeholder rather than a true descriptor of the spirit of their work. This discomfort also played out as the OCSDNet team struggled with live translation (when Denisse and Josique attempted to translate the presentations from Spanish to English for Leslie) and we quickly discovered the challenges of finding translations for cultural expressions that shape vocabularies of sharing.

The diversity of actors of the seminar and workshop made evident that one of the key barriers to open and collaborative science is the lack of communication and trust between knowledge producers; which is to an extent rooted in the distinct vocabularies and languages used to define science, knowledge and development. When UTP seminar attendees started embracing the language of Open Science, we noted it as a positive sign of the growth of the OCS field. However, the experience in Belen de Umbria very quickly raised flags about the language we are using to communicate and promote the values of OCS beyond academia and the extent to which it may be inhibiting communication and collaboration between other communities of practice.

Should grassroots community groups (such as the educators, farmers and community leaders we met in Belen) who are promoting inclusion and collaboration in their work define themselves as open scientists? Or would this mean they are adhering to yet another externally constructed model of knowledge production to acquire legitimacy and recognition? As tempting as it is to map out all these initiatives under the same umbrella term, the autonomy of their practice should not only be celebrated but encouraged. As a network, we are developing the ability to remain observers and collaborators, rather than taking the role of ‘legitimizing’ agents by introducing more labels and frameworks to describe what they do.

That said, there seemed to be a shared recognition around the benefits of fostering collaboration between diverse communities, as long as existing social and cultural prejudices between groups are addressed. For example, as brought up by professor Jorge Orejuela, indigenous and afro-Colombian knowledge(s) continue to be barred or delegitimized by scientific networks, limiting the capacity of academic researchers to develop a nuanced understanding of afro and indigenous cosmovision and establish meaningful partnerships with these groups. In what ways can the growth of open science practices challenge entrenched judgements regarding different sources of knowledge? How can we as a field foster humility, respect and the recognition of other forms of knowledge as equally valid and worthy of a scientific recognition?

How can OCS reflect ‘alternative’ paths to development?

Spending time in Latin America also exposed us to local ideologies that fundamentally challenge the tenets of Western development agendas; making us question if we are doing enough to challenge what we mean by ‘development’ as a network. By exploring alternative perspectives to development in regions where OCS is growing, we will be more likely to define openness in a way that reflects the plurality of worldviews across our network.

While in Colombia, we paid special attention to the philosophy of Buen Vivir (Living Well in English) which posits a holistic and community-based approach to development, emphasizing harmonious cohabitation between humans and nature, as well as the preservation of our social, cultural, historical and ecological heritage. It was evoked by multiple actors throughout our visit, from scholars and university students to coffee producers and community leaders, who believe principles of equity, plurality and sustainability should be the drivers of development -rather than the advancement of private gains that characterized development in the 20th century.

Seminar speakers theorized about what openness and OCS would mean in the context of Buen Vivir and found fascinating connections. Orejuela linked collaboration with notions of community: how can open science support the communitary management of resources?. Giraldo emphasized plurality by proposing the collaborative production of cultural maps to document myths, traditions, symbols that constitute the country’s patrimony and heritage; and finally Lorenzo tapped on to how community based development challenges notions of inclusion and participation. This theme has inspired further research on the links between contextual understandings of openness and development in our network.

Making OCS relevant across contexts requires making the connections with local ideologies and grievances clear, through evidence that demonstrates the potential of OCS, as well as its benefits and challenges. While we have done significant progress in the theorization of openness, in order to make a case for OCS we need to be able to show how OCS can empirically dismantle power structures (in knowledge production, governance, culture, etc.) and achieve its objective of including less visible actors in the development agenda.

Our trip to Pereira also demonstrated openness is an appealing term, yet by no means all encompassing or representative of other inclusive and collaborative knowledge production models. So far the term continues to attract an academically and digitally literate class, which limits our understanding of how ‘openness’ is defined or manifested on the ground. As a network we hope to engage in more nuanced conversations with groups that challenge notions of openness and development as we know it and document this process. Having recognized that Open Science needs not to be introduced but connected, the possibility of locating synergies with other open and collaborative models and building mutual learning relationships with them remains one of our core objectives as we broaden our network.

Finally, the trip to Colombia was also an important lesson in ‘meaning making’ for us at OCSDNet and has inspired us to continue expanding our understanding of openness and explore the multiple iterations it takes in the South and its peripheries.  With this in mind, we have identified a new thematic area that explores the meaning and context of openness and development. We will continue to foster these conversations among our members to explore the plurality of regional and local expressions of OCS, and as a result frame a nuanced, multi-layered and context-sensitive understanding of open practices for our network.