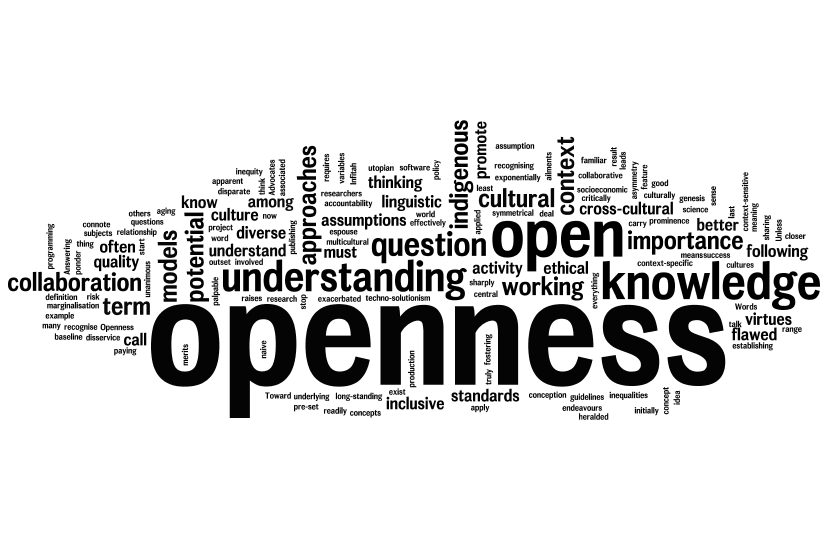 Toward context-sensitive openness: how understanding multicultural conceptions of openness can help us better apply it

Hani Morsi is a doctoral candidate at the Institute of Development Studies at University of Sussex, UK. He is interested in issues at the intersection of technology, knowledge and politics. He blogs at http://p2pdemocracy.com and tweets @hanimorsi.

Few subjects feature in recent discourse on knowledge, science and culture with the prominence of ‘openness.’ With its genesis in the collaborative tenets of software programming culture, the term often conveys utopian undercurrents of techno-solutionism. Openness is now heralded as the antidote to the ailments of aging, flawed and long-standing models of organising social, economic and political activity.

Indeed, the merits and virtues of openness – in its most general sense – cannot be overemphasized. Advocates of openness speak of the ‘democratizing’ effect of opening up resources, how it leads to better collaboration, more effective co-production and sharing of knowledge, and how it can lead to fostering environments that are inclusive of indigenous knowledge. Let’s stop to ponder that last point for a minute.

If we consider ‘indigenous knowledge’ as central to the success of many endeavours that espouse the virtues of openness, we must then question if those who are contributing such indigenous knowledge have the same understanding of openness as we do. That is, there is a tacit and arguably flawed assumption among advocates of openness that there is universal conception of openness. The idea that the concept of “openness”, or the quality of being open, has a culturally unanimous understanding is not only naive, but also does a disservice to efforts aiming to promote open approaches in collaboration and knowledge production.

Once we establish that the meaning of openness is not always symmetrical cross-culturally, we then recognise the importance of raising the following question, at the outset, in any project or activity that adopts open models or standards in a cross-cultural context: Does the definition of openness translate equally to everyone involved? Answering this question requires what behavioural researchers call “cultural metacognition”, or recognising that we should critically question our pre-set assumptions about how other cultures understand concepts that can have an important bearing on our working relationship with them. Words can carry different meanings and connotations as a result of cultural and linguistic variables and specificities. For example, in Egypt the Arabic word “Infitah” (openness) is often associated with a policy that sharply exacerbated socioeconomic inequalities in the 1980s, and – at least for someone who isn’t familiar with openness as we understand it here – can initially connote inequity and marginalisation. Unless we are aware of the importance of establishing a baseline of understanding of how the term should be applied that is relevant to the context in which we are working, we risk obscurity that hinders the potential of truly transformative potential of open and inclusive approaches.

We already know a great deal about why openness is a good thing, but what do we know about cultural and linguistic barriers to openness?

In our exponentially hyper-connected world, thinking about infusing everything we do with the quality of being open cannot be divorced from thinking about how diverse our understandings of the term can be. Then, to effectively promote open models, standards and approaches in a diverse range of activities, from academic publishing to governance, citizen empowerment and accountability, we must start paying closer attention to what I call the sociology of openness, which raises the following questions, among others:

•    What are the underlying assumptions that exist about openness in the context we are working in?

•     How can we limit the potential of a cross-cultural asymmetry in understanding what ‘open’ means?

•    What are the ethical responsibilities that have a context-specific importance that may not be readily apparent when we think about open research and collaboration ethical guidelines?