This is the first of two posts describing the experience of OCSDNet members who attended the Open Science seminar at the Universidad Tecnológica de Pereira (UTP). The first post will describe what happened at the event and aims to connect our members with the speakers’ work and resources shared. The second post will  reflect on our visit after learning from the many ways in which ‘openness’ is understood and practiced in Colombia. We would like to express our gratitude to UTP and our very kind hosts in Colombia for the fascinating networking and learning opportunities we had the privilege of sharing.

From October 12th to October 19th, OCSDNet members Leslie Chan and Denisse Albornoz visited the province of Risaralda in Colombia to attend the two-day seminar ‘Ciencia Abierta/Open Science: Discovering Collaborative Tools for Research and Development’ at the beautiful campus of the Technological University of Pereira (UTP – Universidad Tecnológica de Pereira). The event was organized by John Mario Rodriguez, UTP engineering faculty, and Josique Lorenzo, an OCSDNet grantee and principal investigator of the ‘Improving Adaptive Capacity with OCS and Participatory Governance’ project in Costa Rica and Colombia.

The seminar brought together UTP students and faculty, with scholars from Colombia, Spain and Canada, working on a diversity of issues, all within the context of exploring open science and what it means within a development context. For instance, some of the discussions focused on the protection of digital rights, biodiversity conservation and experiential pedagogy, defining ‘Open Science’ why it matters, as well as leveraging OCS as a practice to strengthen democracy. Importantly, some discussions also sought to unpack the multiple dimensions and forms ‘openness’ takes in culturally diverse and highly politicized contexts, such as Colombia.

Leslie Chan, the principal investigator of the OCSDNet, kicked off the conversation with his presentation ‘From Open Access to Open Science’. For many, including the speakers, this was their first encounter with the concept of ‘openness’ and its potential to challenge hegemonic models of knowledge production. This introduction invited all participants to unlearn and/or reconsider standard definitions of ‘science’ through critically questioning who we consider to be the holders and producers of ‘legitimate’ knowledge in our societies, what forms of knowledge we deem valid for the process of scientific research, and what are the motivations driving the production and circulation of scientific knowledge today.

“Knowledge production is no longer about ‘expert’ production of knowledge for people to use. It is a public process that involves different players: from undergraduate and graduate students, to citizens and non-specialists alike” Leslie Chan, OCSDNet PI

These remarks set the scene for the next two days, as the speakers, in spite of their diverse disciplinary backgrounds, situated their work in the open science movement in terms of how they enable the participation and inclusion of non-traditional actors in science and research.

What follows are snippets of the speakers’ presentations, their perspective of openness and some of the resources they shared with the OCSDNet team in Pereira.

Pilar Saenz is one of the Project Coordinators for the Colombian advocacy organization Fundación Karisma. Her talk described how values present in open movements, such as transparency, cooperation and collaboration, could fundamentally transform the legal, education and digital landscape of Colombia. Her presentation resonated with students as she presented the case of Diego Gomez to problematize what it means to share scientific knowledge on the internet today. The commercial logic behind the privatization of scientific research, coupled with outdated copyright laws which have failed to adapt to a post-internet world, continue to impede the free circulation of all types of information; including artistic material, educational resources and cultural products.

“Every day we share movies, pictures, music without asking for permission (…) We want to live in a world in which we can produce culture and share it in order to produce more. There needs to be alternatives in order to keep doing what we are doing without continuously breaking the law”. Pilar Saenz, Karisma Foundation

Pilar urged students to reflect upon their current digital habits, challenge the norms that inhibit their creative capacities as students and citizens, and embrace open movements – such as open software, open education and open access – as viable alternatives on which to ground their creative practices. 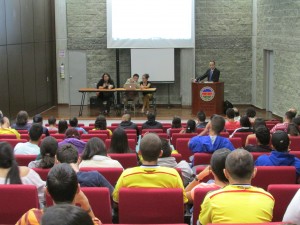 Josep Pinto is a Professor in the Physical Geography Department at the University of Girona (UdG) and Director of the Laboratory of Landscape Analysis and Management. While initially unfamiliar to the concept of OCS, he addressed openness from the perspective of biogeography and ‘landscape management’ (a field that studies the characteristics of land, as determined by the interactions of natural and human factors), by connecting participatory consultations and the inclusion of citizens in decision making processes with open science methodologies for advancing democracy and sustainable development.

His description of techniques used to capture the “spirit” of landscapes (wherein ‘spirit’ refers to the symbolic, perceptive and subjective value attributed to land) was particularly striking. Landscape management has been incorporated into European public policy as a mean to settle disputes between public and private interests, with the objective of protecting the symbolic capital of less powerful groups and making their voices heard. This was evocative of social conflicts in Latin America in which the views and values of indigenous communities are not taken into account in state-led development processes. Pintó recommended the use of open science as an important approach towards actively facilitating social inclusion in spaces, whereby citizens are seen as key stakeholders and their views and perceptions can shape the meaning and management of common resources. 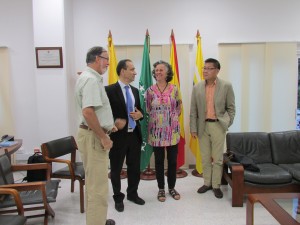 Martha Giraldo, an ICT specialist with a long career leading government science, education and culture programming, presented on the lack of access to information in Colombia and how it impedes the strengthening of democracy and transparency in the government apparatus. Her presentation provided a comprehensive overview of what has been done in regards to science, technology and innovation by the state over the years, but called for an ‘information for development plan’ that organizes, centralizes and connects information produced by individual ministries with citizen needs and bridges the gap between citizens and the government.

“I am clear that the path to development is a journey based on collaboration towards finding common goods above individual interests” Martha Giraldo, ICT specialist

Open Science and Research in Education

Three student scientists (ages 7 to 9) and their teacher presented on behalf of Project ONDAS, the Colciencias (Colombian Ministry for Science and Technology) pedagogic project that explores scientific, student-led research as a tool to promote civic culture with Colombian children and youth. Through their ‘Research as a Pedagogic Strategy’ program, students take ownership of the research process by designing research questions, conducting field studies in natural reserves, sharing their findings in online and offline multimodal formats and finally, applying their new knowledge through seven disciplines connected to the project via the school curriculum. The research themes include ancestral knowledges, biodiversity, food security and Buen Vivir, among other key issues selected awaken children’s passion towards preserving their country’s environmental and cultural resources.

“The skills and capacities children learn help them understand science, but also gives them an understanding of how to live responsibly and happily as citizens” Maribel Incapiel, Teacher from Proyecto Ondas

Students from Proyecto ONDAS presenting about their findings

Openness in Community Management of the Environment

Dr. Jorge Orejuela is the director of the Cali Botanical Garden and faculty at the University of Cali. His presentation was a powerful description of the role of citizen science in indigenous communities in Nariño and Afro-Colombian communities in Chocó and Valle del Cauca. His case studies focused on two spontaneous manifestations of openness, the first being, youth-led initiatives to collect and publish knowledge about local biodiversity, and the second, community-led, eco-tourism models designed to boost the region’s economic activity with minimum environmental impact. Both were developed to foster stronger appreciation for local identities, territories and knowledge, but are also a sign of internally devised mechanisms to document and ensure the cultural and environmental survival of communities.

Citizen science was thus proposed by Orejuela, as a method to generate, circulate and exchange informational resources (within and outside these communities) to resist the interests of dominant groups pushing free market agendas over holistic approaches to development endemic to the region. His appeal framed citizen science as a powerful political tool to support the ongoing struggle of indigenous peoples against decolonization and their appeal for self-determination and autonomy in Colombia and Latin America.

Openness and Collaboration for Development in Colombia

Finally, John Mario Rodriguez brought the two day seminar to a close, powerfully situating ‘openness’ in Colombia’s current moment in history, as the state approaches the end of a 50-year-long gruesome war with the FARC. He posed, “How can openness help us produce knowledge to deal with the upcoming challenges of the post-conflict era?,” questioning the role openness can take in reconciliation processes, as well as encouraging the UTP community to reflect on the challenges of their political and social landscape. On this note, he encouraged students, particularly from the Engineering and Environmental Studies programs, to actively seek opportunities to collaborate, promote inter-disciplinary learning and maximize their innovative capacities by working together.

Learnings picked up at the seminar have already started paying off. The motivation of highly driven students and faculty of UTP has crystallized into a series of initiatives to include Open Access in the university’s programming. Starting with the launch of a student-run Open Access working group, led by student leader Adriana Santa, with the support of John Mario, the Dean of Industrial Engineering Wilson Arenas, and Leslie Chan as an advisor. The group will meet regularly to discuss the what opening scientific research could mean for UTP and identify tools and opportunities moving forward. 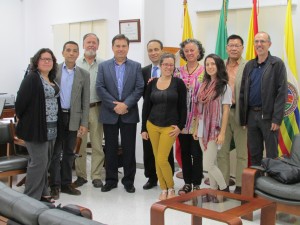 Along the same lines, the library department enthusiastically announced their plans to continue digitizing research articles and increasing access to digital repositories for faculty and students. And in an unexpected yet fortunate turn of events, the university’s rector, Luis Fernando Gaviria Trujillo, welcomed the seminar speakers into his office to discuss ideas around openness in public education, and with great interest in what Open Science offers, he requested a proposal to incorporate open policies in UTP’s research and education programs and put UTP at the forefront of the open science movement in Colombia.

As OCSDNet, we are always excited to see projects that champion openness and collaboration emerge, but after spending time with the incredibly kind and intellectually curious community at UTP, we are rooting for them and will be closely following their initiatives as they continue to grow and consolidate. We trust that the lens of openness taken up after this seminar, coupled with UTP’s mission to advocate for socially responsible science and technology practices, will be a powerful combination to equip and inspire students, public universities and intellectual and cultural communities to continue collaborating to solve Colombia’s pressing development challenges.

Thank you UTP for a wonderful experience!