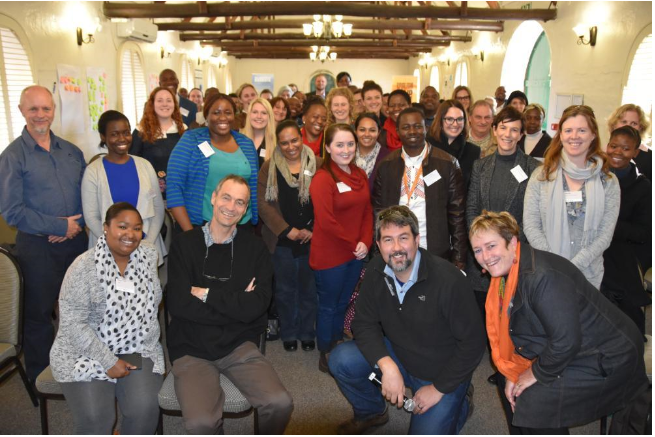 “Knowledge co-production and learning” was a key theme at the recent 2nd Southern African Adaptation Colloquium 7-8 July, 2016 in Johannesburg, South Africa (hosted by GSRI, Wits University, ACDI and the Adaptation Network). Dr. Cath Traynor (Natural Justice), and Community Researcher, Mr Gerren De Wet (Indigenous Nama youth) gave a presentation co-authored with Dr Laura Foster (Indiana University, Bloomington) from the OCSDNet ‘Indigenous knowledge and climate change adaptation project’. Our talk began with provocations for the audience. We asked, “Who gets to produce scholarly knowledge?”, “Why is certain knowledge produced and not others?”, and “Who gets to benefit from knowledge production?”. By applying a critical approach to our own research, the team has found that those who get to produce scholarly knowledge are those who meet the demands of the funders, and those who adhere to normative standards of human subject research and who do not go beyond the research ethics processes. To counter normative research approaches, which tend to be extractive in nature, as researchers, we have developed community-researcher contracts with communities. These contracts seek to better establish expectations, and how knowledge will (or will not) be shared, and ensure protection of indigenous knowledge (IK). Through the questioning of research structures which we ourselves are working within, we hope to develop practices of knowledge production that are more responsive to hierarchies of power and inequality.

Approaches such as ours, could be said to fall within what Professor Heila Lotz-Sistika (Director, Environmental Research Learning Research Centre, Rhodes University) who gave the Colloquium’s opening keynote address, referred to as feminist, post-colonial, and transgressive learning – one that challenges the status quo and what is normalised in society. Prof. Lotz-Sistika emphasized that social learning in climate change adaptation needs to be both open-ended and open-minded, and noted that a recent Finnish study found that the most cutting-edge learning occurs within models where people learn together and learning is critical. She also shared a recent climate change study on the Eastern Cape Province (South Africa) which included community matters of concern, and went beyond the present day physical (e.g. food and water) to encompass the past (e.g. historical injustices of marginalization). She noted that these very tensions could be harnessed as foci for transformative change. Reflecting on how to ensure ‘social learning,’ Prof. Lotz-Sistika commented that the decolonisation literature, which acknowledges past marginalisation and exclusion of people’s knowledge is valuable. In her own research, Prof. Lotz-Sistika has found that it is knowledge systems organised as networks, rather than linear systems, that have produced innovation in both university and community learning systems.

Building upon the notion of ‘transformative change,’ Professor Mark New (Director, African Climate and Development Initiative, University of Cape Town), facilitated a discussion on “transformative adaptation.” Prof. New shared that within the climatic/environmental change field, writings on transformation draw from systems ecology and see transformability as a positive characteristic of resilient systems, and one that can involve innovative forms of adaptation. Critical social science writings take this concept further and perceive transformation to include societal changes that challenge differential vulnerability to climate change. Prof. New and colleagues understand ‘transformational adaptation’ as adaptation that in itself constitutes a step-change, but that ‘transformational adaptation’ implies that the adaptation activity can be transformative and change other things in society, e.g. power, agency and governance (see Few et al. 2014 Transformation in Adaptation). Prof. New encouraged colloquium participants to consider what broader set of outcomes the notion of adaptation in the Southern African context might be delivering, beyond just climate change adaptation.

Professor Sheona Shackleton (Department of Environmental Science, Rhodes University) gave the final presentation at the colloquium on “Learning about learning: how do we prepare future professionals and researchers for knowledge co-production processes?”. She highlighted that conventional research needs to be challenged and that the research process itself is a social-political process: social learning can be subversive and challenge existing hierarchies. She highlighted that “the ethics of co-production and how we train around this needs much more attention,” e.g. the role of the researcher in these processes, and the power of different voices. Furthermore, she encouraged participants to “keep pushing the university system” in areas where transdisciplinarity and knowledge co-production are important.

During the colloquium, presentations and discussions such as those mentioned above, suggested that transgressive approaches to open and collaborative science, could indeed play a role in contributing towards transformative adaptation in climate change. The colloquium closed on a positive note, acknowledging that a new wave of innovation is required to address the root cause of climate change, and that this innovation has to be a social one, based upon human behavioural change generated through knowledge and choice, and that with a critical mass, societal change is possible.