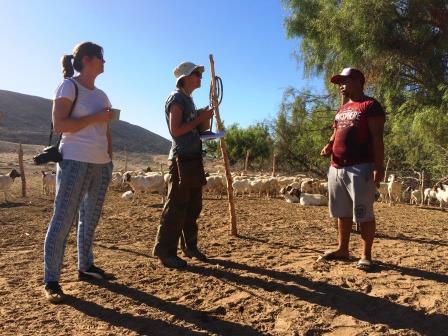 The Indigenous Knowledge and Climate Change Adaptation two-year project engages in participatory action research (PAR) with indigenous Khoe peoples to assess how climate change has impacted their communities; how they have produced indigenous knowledge related to addressing climate change; how such knowledge is characterized (or not) as indigenous intellectual property and openly shared (or not) with the outside public; and what types of laws and policies (including intellectual property rights) promote and/or hinder these strategies and open collaboration with the public. The project goal is to re-conceptualize climate change, intellectual property and indigenous knowledge not as inevitable environmental changes, natural property rights, or traditional (i.e. less valuable) ways of knowing, but to understand them as structured by political, economic, and socio-cultural histories of the Khoe indigenous people.

Developing the monitoring and evaluation framework

A key component of the project was the development of a monitoring and evaluation (M&E) framework in order to regularly reassess project goals and achievements and iteratively revise the project plan. Project implementation began in February 2015 and a couple of months later, the team fine-tuned our monitoring and evaluation (M&E) framework. The M&E framework was designed to enable the project team to (1) keep track of implementation (activities and progress towards achieving results), (2) reflect on and learn from the work together with stakeholders in order to continuously improve practice and (3) to be accountable towards the donor and target group(s). The M&E framework has deliberately been kept simple and is regarded as a living document, which can be adapted and expanded if and when the need arises. Developing the M&E framework forced the team to think through different aspects of the intervention and to be even more concrete about what the project actually aims to do and achieve. The team felt this was very beneficial to creating a shared understanding. The exercise also built the capacity of the team, who will be able to design their next M&E framework with considerably less external assistance.

The M&E framework for the project was developed using a logical framework (logframe), but also includes elements of Theory of Change thinking and Outcome Harvesting. The logframe provides a straightforward system for managing, monitoring and evaluating projectable change (change processes that have a linear cause and effect). In addition to the verifiable indicators that will be used to monitor progress towards achieving pre-planned output and short-term outcomes, the team will work with Outcome Harvesting to monitor the less projectable aspects of the project. Developed by Ricardo Wilson-Grau and colleagues over the last decade, and inspired by Outcome Mapping methodologies, Outcome Harvesting helps to identify, formulate, verify, and make sense of outcomes that have been influenced by a project intervention when relationships of cause-effect are not linear. Outcome Harvesting does not measure progress towards predetermined outcomes or objectives, but rather collects evidence of what has been achieved, and works backward to determine whether and how the project or intervention contributed to the change. Notwithstanding the research character of the project, an important component of the project is to build the capacity of various stakeholders involved. Outcome Harvesting questions will be used towards the end of the intervention to determine whether and how the project contributed to the capacity building of these stakeholders.

In order to make the project team’s assumptions in relation to how change happens more explicit, a Theory of Change was developed. For example, with regards to the project goal, there is an assumption that indigenous knowledge (IK) related to climate change adaptation exists in the communities, but this may not be the case, as some of the communities had their lands taken from them generations ago. This had a detrimental impact upon their ability to maintain some traditional livelihood practices and associated cultural elements, furthermore, some of the elderly members of the communities who are key knowledge holders may have passed away. A learning question for the team is whether some limited exposure to peer-to-peer horizontal knowledge exchange on IK and a capacity building workshop at the end of the project will spark a desire within some of the youth to be further engaged on the topic of climate change and IK in the future. The assumption is that climate change is important enough for both communities to actually engage on in the future. As the programme unfolds, more information will likely emerge to confirm or challenge these assumptions. The Theory of Change will be used to record this learning and adjusting.

To reflect on the intervention, the team will use Feedback Loop sessions, which will take the form of a facilitated conversation that will be recorded and transcribed. In these sessions, the logframe will help the team to check whether the implementation is on track, whereas the Theory of Change will function as a framework to guide the conversations on more strategic issues. In the first year of project implementation, the team has engaged in two Feedback Loop sessions. The first one took place on 14th May 2015. One of the topics of this Feedback Loop session was the Ethical Clearance process. As research is the main focus of the project, we had to apply for ethical clearance from both the University of Indiana and the University of Cape Town. A rich discussion on the difference between ethics and social justice ensued, whereby team members contested the Ethical Clearance process as it limited the way in which community members could collaborate with as fully-fledged co-researchers. This discussion will feed into the production of several knowledge products by the project team, including an earlier OCSDNet blog.

One of the assumptions captured by the Theory of Change is that there will be interest in the participating communities to continue to work on climate change. An interviewee in one community had articulated their most pressing need as assistance with land claims and documenting their history, rather than climate change. A question as to how exactly the project would benefit the two participating communities surfaced as well. Our research team members committed to being as clear and open as possible about the limitations of the project to ensure expectations remain realistic. The Outcome Harvesting process, to be executed towards the end of the project, will shed more light on how the communities have or have not benefited from the project. Towards the end of the project, communities will also be given an opportunity to discuss whether and how they are interested in building upon the findings and experiences of this initial project.

The second Feedback Loop session was part of the mid-term review of the project, which took place on 29th of February 2016, one year into the intervention. Apart from monitoring the progress of the project with the help of the logframe, the session focused on identifying the biggest achievements, challenges and lessons learned.

Some of the biggest achievements mentioned by project team members were that relationships have been developed with researchers from Natural Justice, Indiana University, University of Cape Town and the Griqua and Nama communities. Co-researchers from the Griqua and Nama communities have assisted in exploring CC and IK issues. Furthermore, student interns with Natural Justice and graduate researchers with IU and UCT have assisted with the project, which has gone towards preparing a new generation of experts in the field.

Researchers have continually questioned how to ensure that the approach of combining research, capacity building and advocacy is also relevant for the two community partners. It seems that the project has already benefited the communities in ways that are perhaps less tangible. In terms of preliminary results, the communities now have a draft contract on IK that they can use with outside researchers and NGOs that want to do research in the community.

One of the main challenges of the project is time constraint. It took more time to establish the project than anticipated, and it is also taking much more time than anticipated to foster collaborations and communicate with all the different stakeholders involved. Another challenge is the geographical remoteness of the communities and the somewhat limited face-to-face contact time with the community co-researchers. However, the project is striving to overcome these challenges and to involve the co-researchers directly into some of the project reflection activities that take place in Cape Town.

Plans for the final project evaluation

In December 2016, the project manager and researchers will undertake an End-of-Project self-evaluation. This evaluation, together with the Outcome Harvesting session that will be carried out prior to it, will shed more light on the question whether indigenous communities have been able to respond differently to climate change issues, whether they would like to share these practices with others and what kind of IP consequences this will have. We look forward to sharing with you more of our learnings.