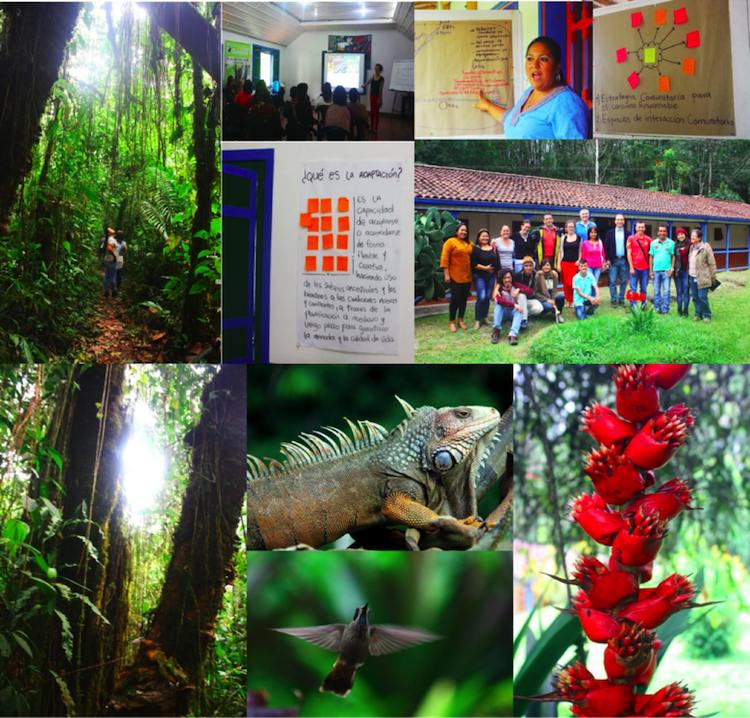 We aim to improve decision-making and governance in relation to climate change within Model Forests and promote an environment conducive to open practices among citizens and the scientific community.

Climate change is arguably the most important challenge facing the international community in our era, with far-reaching implications for poverty, growth and development. Meadowcroft (2009) has described some key characteristics of the problem: unprecedented societal reach, scientific uncertainty, distributional and equity linkages, long time frames, global implications. International institutions have also acknowledged that a high-quality governance is essential to tackle climate change. However, the global governance frameworks and international climate processes have not progressed enough toward a solution, highlighting the need to implement measures at other scales (national, municipal, landscape, local, etc.). Experts have pointed out that effective climate governance will require complementary actions in smaller settings and the participation of a wider range of formal and informal, state and non-state institutions (see for example Busby, 2010; Ostrom, 2009). In light of these new tendencies, Model Forests come into play as an important alternative to establish more effective and equitable climate governance processes at the landscape-level. Model Forests (MFs) are social initiatives through which a diversity of people and organizations work in partnership toward a common vision of the sustainable development of a given territory.

What type of environment, attitudes and incentives are conducive to adopting open practices and to tying knowledge to local problem-solving? Our research is practice-based, with a focus on the role that landscape governance platforms, such as Model Forests, can play.

Our approach is based on participatory action methods and includes a capacity-building and knowledge-exchange component. Through a series of focus groups, workshops, field trips and meetings we have initiated a process to:

Challenges so far in the implementation have been mostly administrative challenges (setting up local contracts, bringing money into another country) and the difficulty in finding convenient times for everyone to participate in meetings and workshops. Another major challenge is that the process we had envisioned is extremely time-consuming which also brings us to the lack of human and financial resources.

The project had several interesting outcomes. For example, one of the local communities got organized and even recently created its own new Foundation called “Fundación Red Agroecológica Villa de los Guayacanes” in Belen de Umbria, Colombia. Another community group in Villamills, Costa Rica got so motivated that it seek out the volunteer services of a teacher to improve their computer and oral presentation skills in order to be able to give better presentations, considering the local tourism initiative they want to set up. In total, seven local projects are underway which means we have seven local groups who are highly motivated.

Nevertheless, we have had less success in engaging certain communities and scientists, since the perceived benefits are quite low for such a high-involvement process. Indeed, those who are already engaged in organized groups and platforms have been more eager to participate and the most enthusiastic about the project. The community groups and people engaged within the project are typically leaders in their communities. On the other hand, poorer marginalized groups have more urgent priorities and would require a different process, which falls outside of the scope of our project. We aim at being inclusive, but people are still responsible for their own empowerment.

Finally other emerging findings are connected to the comparison between both processes in Colombia and Costa Rica, in terms of academic and institutional support, activities developed during the workshops, etc. For example, participants in both Model Forests have shown a keen interest in sharing local expertise with scientists but also in receiving the results of relevant studies in a friendly format.

We have found that “openness is a mindset.” This has several implications, including that our job is to work on promoting a certain type of attitudes (more openness in the community to the elites and scientists, and more openness in the academia to sharing and co-creating with the community). However, we are constantly reminded that this type of work is not for everyone. Openness should not be forced upon people: we need to respect people’s will if they choose not to engage or if they still prefer the conventional way of doing science.
Second, we should not overvalue the label: one can do “open science” without calling it that way. The name or label is useful to promote the belonging to a community, the integration to a broader movement, etc. but on the ground, it is difficult to convey the meaning of this concept, and perhaps not always necessary. Openness therefore is a philosophy, which translates for us in a certain way of doing things, a certain methodology to work with the communities. Platforms such as Model Forests can enrich the openness discourse because they share similar values (as well as other values that are compatible). The fact that the word openness as such is not being used should not be seen as a restriction.

…And seven local initiatives were born: The end of a project, the beginning of a journey

This post provides some insights on a recent Model Forest event, reporting on experiences of its application across Latin America and the Caribbean and how Model Forests, as a landscape approach, advance sustainable development.

Informal account of our second workshop in Costa Rica: https://sites.google.com/site/fundacioncrinnovacion/0—noticias/colaborandoconelcatieeneldisenoydesarrollodeproyectos