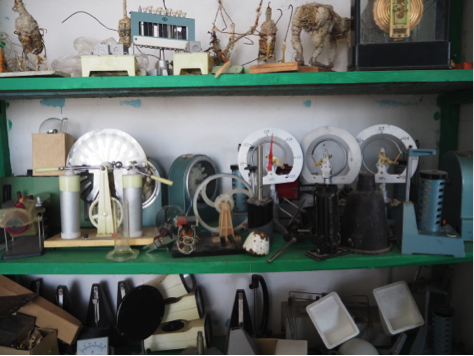 Openness and collaboration: knowledge sharing within OCSDNet and beyond

– Through encouraging local teachers and students to participate in shaping the research focus and the activities to be conducted, there are unexpected challenges and knowledge gaps that arise along the way. Exploring these challenges offers opportunities for learning and cooperation within global networks of open science enthusiasts.

– Although Kyrgyzstan, the KMEECS team and the Central Asian region are relatively new to the open science field, this blog highlights two key examples of cross-disciplinary learning and the enthusiasm of the global openness community towards supporting the creation of open knowledge.

The “open science bubble” and grassroots development in Kyrgyzstan

‘Open Science’ is a new concept for Central Asia; appearing in only a few scattered projects around the topics of open data, open education and cooperation of different organizations for bridging the gaps in access to knowledge. Nonetheless, the stakeholders involved are enthusiastic and highly motivated to advocate for OCS.

The Kyrgyz Mountains Environmental Education and Citizen Science (KMEECS) project therefore operates in a climate of emerging discourses around openness, sharing and collaboration. At the same time, some are fearful that the opening of knowledge and information might infringe upon security, secrecy and power within the predominant Kyrgyz political system.

The “open science bubble,” described here as the failure to reach people outside the open science community, might indeed also apply to the Central Asian context. This is not necessarily due to a lack of communication efforts by the OCS community, but rather due to the newness of the concept as a whole in Central Asia. For most, it remains to be accepted as an independent scientific research paradigm.

Opening up science creates a vast playground for diverse collaboration opportunities. By focusing on knowledge sharing, the inclusion of diverse actors and alternative forms of knowledge, new possibilities for mutual learning arise. In the emerging culture of openness in Central Asia, there is much to understand, locally, around how openness should be framed and defined. However, as openness is a growing, global movement, there are also important lessons to be learnt from diverse actors, composing different disciplinary backgrounds and cultures.(For instance, see OCSDNet’s blog on ‘the importance of cross-disciplinary learning’).

The next section will demonstrate, using two examples, how global and collaborative partnerships have contributed towards helping our research team develop a deeper contextual framing of openness in Kyrgyzstan as well as facilitating a regional awareness of the development possibilities for open science.

The KMEECS project is compiling a collection of low-cost tools and activities for investigating water resources in the mountainous Naryn province of Kyrgyzstan. All schools in the region are characterized by a lack of lab and teaching equipment. Most of the equipment dates back to supplies provided during the Soviet era, predominantly in a non-operable condition after 25+ years of use.

When first hearing about the potential uses of open hardware at the OCSDNet workshop in Nairobi, our team was excited to attempt such an approach in Kyrgyzstan. In partnership with another OCSDNet project based in South-East Asia, Talgat from Kyrgyzstan was able to participate in an ‘Open Hardware Boot camp” in Yogyakarta, Indonesia. Talgat reported:

“Before leaving for Indonesia I had no understanding of the Open Hardware movement. As a matter of fact, during the boot camp in Yogyakarta I became fascinated by science. Not the kind of science that bored me in school, but accessible, ‘hacked’ science that normal people can use in their daily life. I started to understand how little open and collaborative science is being developed and supported in Kyrgyzstan. While working in a team of very different people to build simple microscopes, investigate the environment, formulate hypotheses and discuss results I realized that cross-disciplinary collaboration and mutual learning as practiced in the Maker-movement is an approach we really need to foster in Kyrgyzstan. Introducing a DIY microscope in schools of Kyrgyzstan could be tested as a low-cost approach stimulating scientific curiosity and at the same time trying to address the lack of lab equipment in remote schools!”

Due to this cross-project cooperation within OCSDNet, this microscope is now included in the KMEECS project. Students and teachers will build these microscopes in order to analyse their environments and collect citizen-science data within their communities. A microscope-building workshop has been conducted at CAMP Alatoo Public Foundation (one of the two implementing partners of the KMEECS project), while different partners in Kyrgyzstan have shown interest in building DIY microscopes for educational purposes. All pieces for building the microscope are readily available in Kyrgyzstan for less than 10 USD. 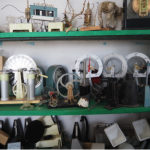 A museum of broken science tools: Soviet-time equipment on a shelf in Kara-Suu village, Kyrgyzstan. 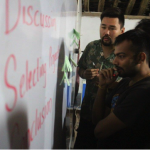 ans-Asian cooperation within OCSDNet: A Kyrgyz participant in the Open Hardware workshop in Yogyakarta, Indonesia. 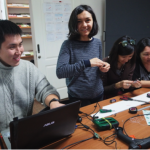 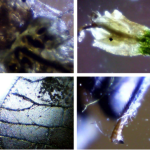 What can we see through our DIY microscope? The inner life of a mosquito larva, pollen from wild wheat, a wing of a flying ant, a leg of a bee.

In a second step, the data collected by local schools on their environment will be visualized and made accessible to the general public. After having selected 10 schools in which the project will work, we realized that villages in the region are poorly mapped, and that openly accessible satellite imagery for this region is not sufficiently aggregated for working at the village-level. This is why the project decided to touch base with the Open Street Map (OSM) community, to benefit from open data generation techniques that are already being used within different remote contexts. Within 48 hours we received 14 replies from OSM specialists willing to come to Kyrgyzstan this April and support us with their expertise on participatory mapping in remote, “undermapped” areas on a voluntary basis. 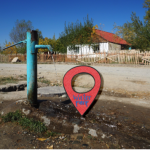 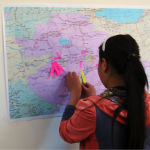 9th grade student highlighting her village on a map during the KMEECS round table meeting in 2015. 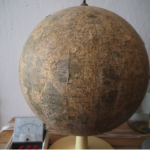 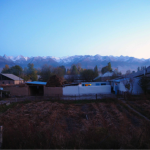 Village in At-Bashy, Kyrgyzstan: what to do when there are no up-to-date maps of the places we work? Our approach is to try to train teachers and students in using Open Street Map.

This highlights the vibrancy of the wider OSM community and their enthusiasm for contributing to grassroots geo-literacy and filling gaps in geo-data. As one of our partners in Kyrgyzstan mentioned during a meeting, “Openness is not so much about data and technology, but it is a philosophy!” This feeds very well into the observation of one of the OCSDNet sub-grantees mentioned in a previous blog post:

“We feel sometimes all this openness discourse is mostly about software and online networks. But, what we really need to do here in the field is to work on “attitudes”. It takes time. Been reflecting a lot about the importance of promoting the right mindset, a change of attitude toward science (…). And how a lot of this comes from our 10+ years of having been educated in a formal schooling system. So a more open education in all senses is key. Openness is really a mindset.”

Particularly in contexts with low awareness of open science, this means that we still have a mountain of work ahead of us. However, we also recognise that we are a part of an enthusiastic global community ready for sharing knowledge and fostering learning across boundaries and disciplines – both within OCSDNet and beyond.

Read more about our project here!