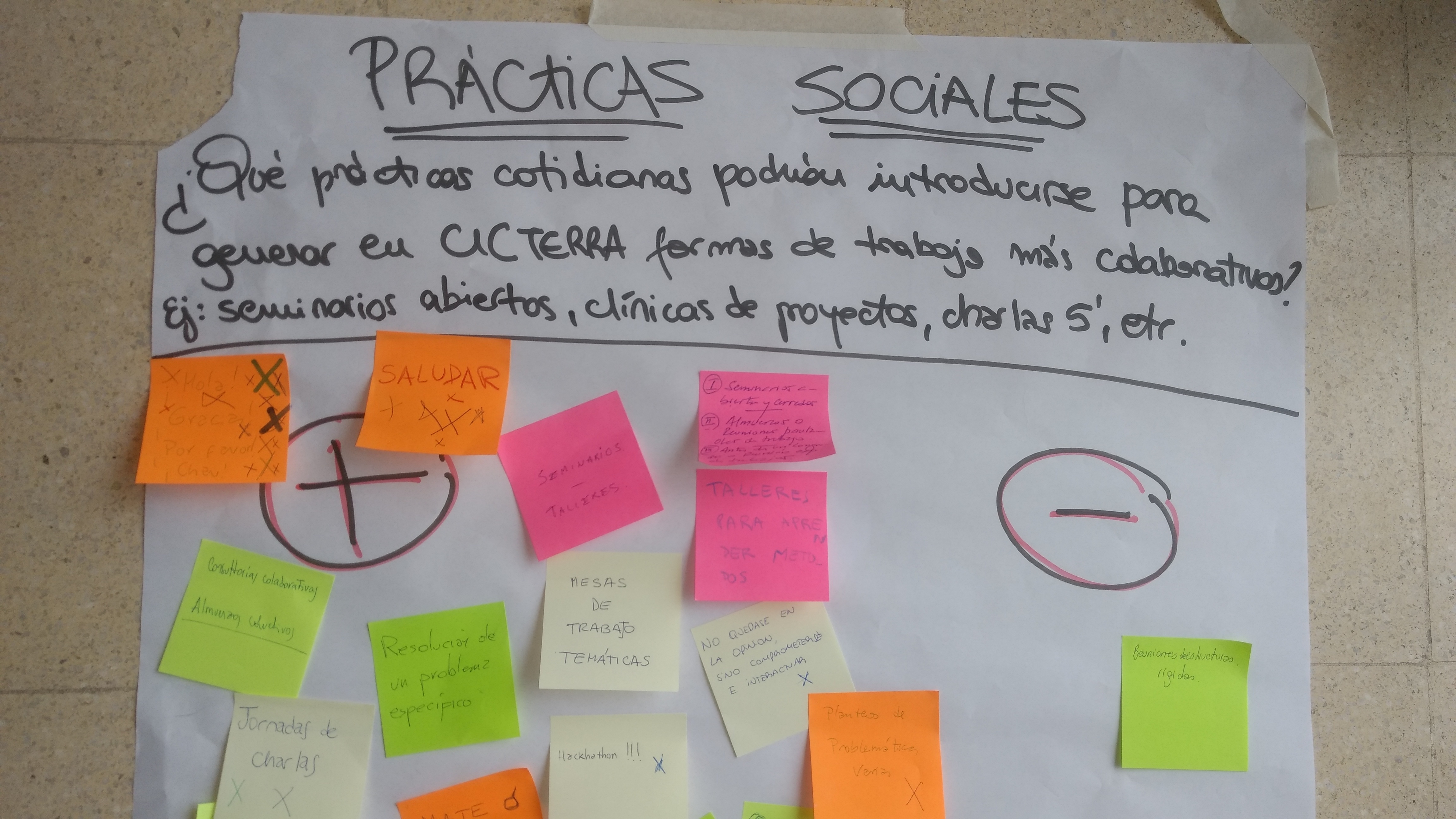 Open Science and interdisciplinary collaboration: it all begins at home – or the lab

A few months ago at CENIT we received an unusual request from a couple of scientific researchers from the Earth Sciences Research Center (CIC Terra), an affiliate of the National Scientific and Research Council in Argentina (CONICET), and one of the country’s largest institution in its field.

The request was very specific: they wanted help to articulate collaborative practices to fulfill the objectives of an interdisciplinary project, recently funded by CONICET.

CIC Terra researchers had some important advantages. They had already succeeded in writing a joint project that was agreed and signed by the majority of the center’s researchers. They also had an enthusiastic core set of scientists who were eager to challenge their own practices and ready to try collaborative practices. Thus, CONICET’s funding was a perfect excuse to experiment with new formats and find new ground in the search of common research goals.

However, answering this request was far from simple…

There is currently a lot of interest from funding Science and Technology (S&T) agencies and international organizations in collaborative and interdisciplinary practices. This attention is complemented with a growing body of literature on the subject. And collaboration and collective intelligence are two central threads in the pursuit of Open Science. But, beyond a few practical suggestions (such as building trust, setting clear reward policies, finding a common research goal), there are not many guides or manual on how to incept collaboration within institutions. As Nancy Cartwright (1999: 18) points out:  “We do not have articulated methodologies for interdisciplinary work, much less something as simple and general as sweetened versions of a good scientific method…”.

On both global and local levels, interdisciplinary collaboration has become a sort of mantra: we are keen to mention it (as if we are invoking some magical power) but the more we repeat the word, the less we understand its meaning.

When we consider the lessons of open science, we see that most collaborative practices are established in formats based primarily on online collaboration and the multiple use of shared resources. This is because the model of collaboration in open science copies practices that have begun in the culture of free software.

When these practices are translated to the scientific field, they work very well in two situations: in cases like Polymath, where most of the people that collaborate work with a very specific problem – the resolution of a mathematical challenge – and share similar capabilities. Or in cases where scientists from different disciplines use the same set of data to run different analyzes – something that is also known as “data intelligence.”

But, how do these practices translate into the everyday life of a scientific research centre? And even more, how can we foster a culture of collaboration and enable it to flourish among the contradictory requirements of the scientific evaluation system?

As soon as we landed in Cordoba, all of these difficulties were embodied in the voices of almost 50 researchers, PhD students and technical staff of CIC Terra that participated in the Open Science and Interdisciplinary Collaboration Practices Workshop. For two days, we ran a series of participatory activities to map expectations and ideas around interdisciplinary collaboration, including exercises like “Rivers of Life” and the Participatory Impact Pathways Analysis (PIPA).

A first observation to consider is that not all researchers want to (or can) collaborate. Encouraging collaborative practices often involves introducing modifications in objectives and practices of scientific knowledge production. And naturally, there are researchers who would rather keep their established routines and thus might choose to actively resist any challenge to that.

Secondly, it was interesting to note that even those researchers who clearly show willingness to explore new collaborative practices are well aware of the difficulties they face. Among the most mentioned obstacles in the workshops were: the constraints of the CONICET evaluation system, the lack of specific incentives and support for interdisciplinary collaboration, question about how to coordinate the growing pressure to publish with the amount of time needed to create collaborations, and finally: the obsession to promote policies of knowledge transference (including patenting) – which are not always adequate for the cognitive objectives of different disciplines.

To think how to generate collaborative practices in shared spaces (not limited to the virtual world), we proposed the researchers think about which tools, practices and processes might be useful. The ideas and expectations pointed out by them were very simple, but at the same time they can be regarded as crucial in any space of collaboration. Some of the examples included:

At first glance, these proposals may appear to be less appealing than supposedly more sophisticated ideas of open science: like data repositories open to the public, citizen science projects, tools such as open laboratory notebooks or open peer review. However, we quickly realized that without practices of democratic and flexible participation in shared spaces, it could be rather difficult to build other forms of collaboration.

Luckily, we saw very good signs among the researchers of CIC Terra. The centre is in a very advantageous position to experiment with new collaboration tools. They regularly hold plenary meetings to make strategic decisions and it is customary to establish working groups with representatives from different laboratories and areas. But like the great majority of scientific institutions, CIC Terra is no stranger to competition and mistrust between peers, obsession with publishing over any other type of scientific activity, remnants of machismo culture, marked verticalism and fears of giving up spaces to experimentation with new ideas.

Perhaps one of the most important lessons of the two intense days of activities we had was the recognition that there is little to gain in trying to force common interdisciplinary problems or objectives, when there are few common spaces and practices that encourage collaboration from the outset. In that sense, the search for relatively simple collaborative practices tells a lot about the distance between the policies of promotion of interdisciplinary research and the daily reality of a scientific research centre.

We can think of open science as a new trend that seeks to update research into the ups and downs of the modern world, or we can think of it as a paradigm that has come to change the production of scientific knowledge as we know it. In these two days, we saw that a design with simple tools that promotes a more inclusive and beneficial collaborative culture for all – scientists and society outside academia – can become part of the path to a different science. There are signs in the air that seem very favorable to begin this path. We just must need to start walking the walk.