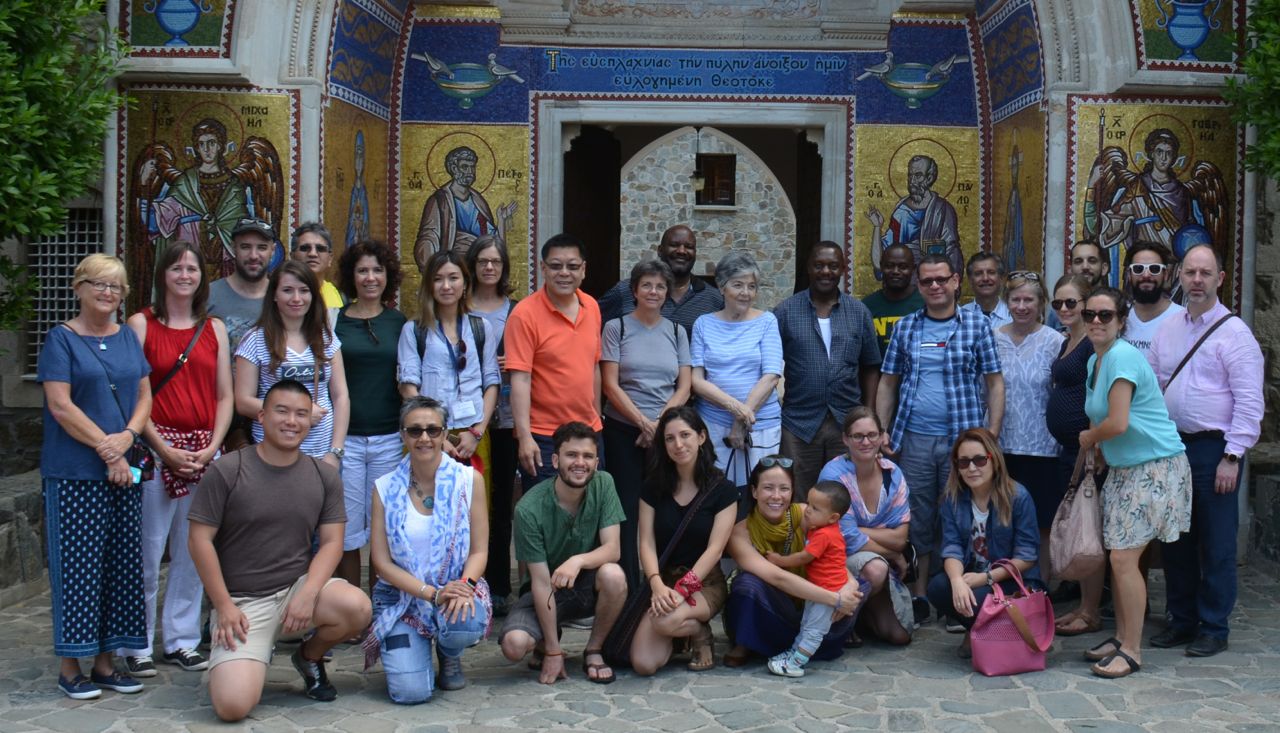 Learnings and Reflections from the OCSDNet 2017 Workshop in Cyprus

From June 2-5, 2017, the Open and Collaborative Science in Development Network (OCSDNet) held its final network meeting in Limassol, Cyprus. Workshop participants included representatives from ten of the twelve network projects, external network advisors, two representatives from DECI-2, IDRC Program Officer Raed Sharif, and the OCSDNet coordination team. As all research projects officially closed in June 2017, this workshop represented a key opportunity to bring together OCSDnet’s diverse membership to highlight and reflect on two years of findings and outcomes from their respective projects, and to collectively consider the possibilities for ongoing and future collaboration.

The strategic objectives driving the planning and activities for the Cyprus workshop included:

To achieve these objectives, the Coordination Team (in cooperation with DECI-2 mentors) sought to create a highly interactive and collaborative space throughout the four days, with minimal individual presentations. Instead, the focus was on small-group discussions, mapping activities, collaborative writing and informal exchanges, to allow for the facilitation of as many organic ideas as possible. Outside of day-to-day workshop activities, the Coordination Team also organised a ‘soft launch’ of the network volume, “Situating and Contextualising Openness,” as well as our collectively-produced Open and Collaborative Science Manifesto. Following the workshop, several members of the network remained in Cyprus to present project findings at the International Conference on Electronic Publishing 2017 (ELPUB).

Over the course of the workshop, the Coordination Team established a “Matrix of Learning” to capture emerging insight and reflections from all research teams. Essentially, the tool ensured that all teams were able to have the space to reflect, at the beginning and end of each day, on what they had learned and/or to contribute feedback to other teams. 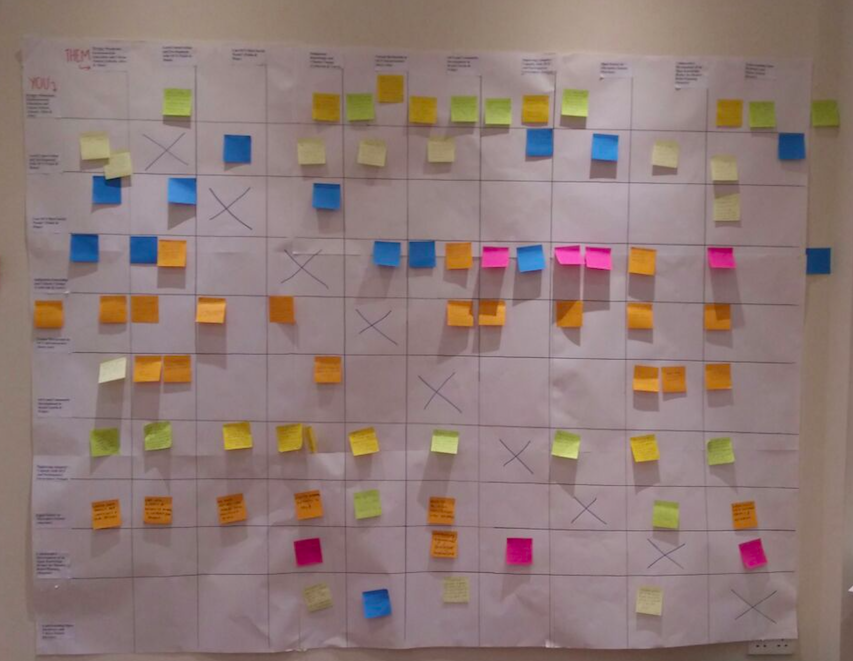 By the end of four days, 91 cross-project interactions were captured. Some of the comments offered words of encouragement or advice for peers, others suggested opportunities for collaboration, while the majority focused on interesting points of information learned from interacting with other teams in various formats. In all, 64 “new” pieces of cross-project learning were captured and coded, according to the keywords below. Importantly, these keywords demonstrate a strong likeness to the goals and principles of the OCSDNet manifesto, suggesting that many projects have come to ‘own’ these concepts, and reflect on them within their respective contexts.

Some of the themes to emerge through the Matrix of Learning included:

Many teams highlighted that ‘openness’ is a very flexible construct, and can only be explored within the confines of their specific context. Many noted how various ‘open’ practices have already existed in various forms in different communities; while others commented on how the idea of ‘openness’ may change depending on your own research paradigm and disciplinary background. All of this alluded to the importance of developing tools, processes and ways of working that are suitable to a localised context.

A general diversity of actors, partnerships and institutions was noted, for the most part, as a strength within various projects, as well as a challenge. In regards to communication, language across diverse communities was a notable challenges, as well as how to adapt research methods and terminologies to the culture of the community. Questions were also raised around how to balance the diverse goals and agendas of different actors.

Related to ‘diversity,’ many teams questions how to communicate effectively “in the open” with partners and actors throughout the research process, including how to be sensitive to the needs and identities of local communities. The branding and marketing of OS for different language groups was noted as a challenge, and the question of ‘how to share bad results’ was raised – both from the perspective of sharing information with communities, but also with funders and institutional partners.

As an example, ‘open science’ has come to denote a particular meaning in English, as a derivative of other ‘open’ fields. However, in contexts such as Kyrgyzstan and Lebanon, these ‘open’ concepts are less widespread. Thus, some teams have largely had to create their own vocabulary for communicating open principles.

Open and Collaborative Science (OCS) was construed by network members as a mechanism to challenge existing power structures around the production of data and knowledge. Power emerged as a cross-cutting theme around openness, partnerships, trust, etc.

Critical questions were raised around who is participating in knowledge creation process, who is missing, and who is pushing the agenda.Some also reflected on the difficulties of fair participation in sensitive contexts, such as while working with Indigenous groups. Motivation for participation was an aspect of these comments, as well as a focus on tools and techniques for facilitating.

One OCSDNet project specifically focused on the need to understand ‘motivation’ in the context of performing community based open science initiatives. This concept resonated well with other teams in the network. Teams noted that motivation is important to understand, particularly within contexts of diverse actors and interests, and when participatory and scientific interests coincide. It is difficult to balance the motivation of community members versus researchers/institutions, but it is important to reflect on and communicate these motivations in transparent ways. One team also alluded to one reason why some may not be interested in participating in OS: “too much openness can harm social movement aims,” particularly in the case where such social movements are controversial and/or demand a degree of secrecy.

Again – there was some reflection on importance of partnerships for OS, identifying and selecting project champions, and the challenges of working with diverse partners. Some projects also alluded to the importance of ensuring that experts are on board, in the case of more complex projects – but also how to balance relationships between ‘experts’ and communities.

Similar to the importance of partnerships, trust also emerged as an important learning point for some teams, who noted the importance of building and developing trust with community members, through effective communication, the sharing of diverse motivations, and the recognition of historical relationships that led to mistrustful or disappointing experiences (such as the case of Indigenous communities). Some debate about the best ways to create and consolidate this trust, with some teams taking a more ‘legal’ approach through the creation of a community-generated research contract, while for others, the issue was not as historically significant and thus other mechanisms were sufficient.

In line with some of the other emerging themes, some projects picked up on the importance of networks for the successful implementation of open science projects. In particular, teams noted that projects tend to be more effective and efficient when existing networks can be leveraged, in which trust is already established through previous working relationships.

Some debate about the opportunities and challenges of engaging with institutions in the context of open science in development. Teams noted the limitation, in some instances of institutions, claiming that “they only follow certain models” of research; and that universities tend to be “business oriented” in their approaches. On the other hand, working with institutions provides a “strong framework for interaction and collaboration,” with potentially important outcomes for sustainability, despite a slower working pace. 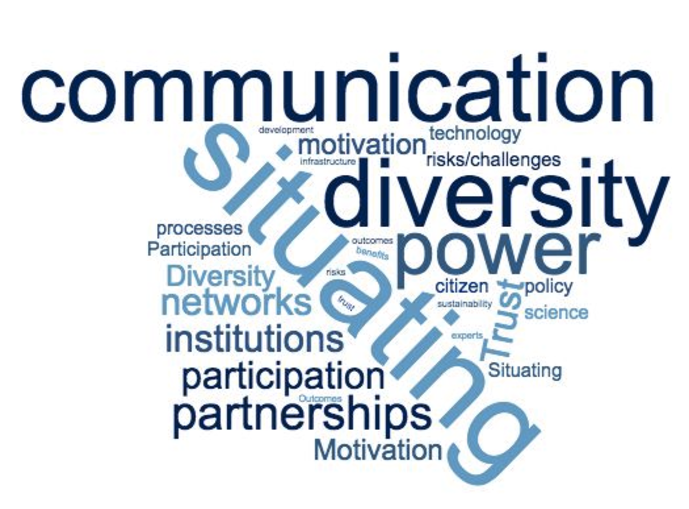 While the OCSD Network may not continue in quite the same format as it has been for the past two years, based on the high level of engagement amongst participants and the eagerness among some to continue collaborating, we are highly encouraged that the field of Open and Collaborative Science will continue to be enriched by existing and new scholars, practitioners, activists and interested parties from diverse constituents. We will continue to use this blog as a space to continue reflecting on how our principles of open and collaborative science are being put into practice on the ground in a wide variety of contexts around the world.

A full workshop report, including a detailed analysis of workshop activities and outcomes is available here.

For more information regarding the OCSDNet Manifesto, please see our Manifesto Page.